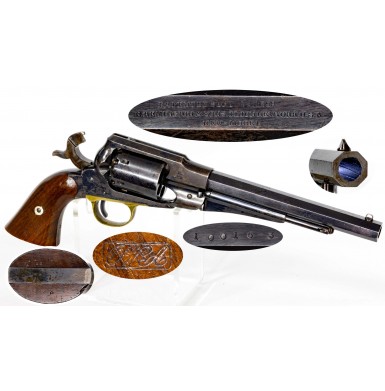 The Remington “Army” .44 percussion revolver was the primary competition to the Colt Model 1860 .44 percussion revolver during the American Civil War era. Although Sam Colt was the better salesman and marketer, Remington eventually beat Colt out of their military contracts by delivering a comparable revolver, which some felt was actually superior, for less money. In 1864, after the US government had finally beat Colt’s price down to $14.00 per revolver from the $20 per gun they had been paying during the early days of the war, Remington agreed to furnish their “Army” revolver for only $12.00 per gun. That ended the reign of the Colt Army as the first choice for the Ordnance Department procurement officers for the rest of the American Civil War.

In the field, even though the Colt revolver had the name and the mystique, many cavalry troopers preferred the much sturdier solid frame design of the Remington revolver. Approximately 106,000 Remington New Model Army percussion revolvers were purchased by US government during the American Civil War, with a total of approximately 114,000 of all types of Remington percussion revolvers purchased during the course of the war. Approximately 80,000 of these were purchased during the last two years of the war, between 1863 and 1865. According to the research published in Remington Army & Navy Revolvers 1861-1868 by Donald L. Ware, Remington revolvers through serial #149,000 were accepted prior to the end of the Civil War. Guns below serial #123,000 were accepted prior to the end of 1864.

The Remington New Model Army revolver offered here is in FINE condition overall. This gun is serial number 100163 and was almost certainly manufactured and delivered in mid-1864. The matching serial number 100163 is found on the grip frame (under the left grip), under the barrel (hidden by the loading lever) and in pencil inside both grips. Like many of the later production Remington New Model Army revolvers, this one has a cylinder with no serial number. It has been hypothesized that only those cylinders that needed work for them to time and index correctly were numbered, in an attempt to keep those cylinders with the guns they had been fit to. Since the New Model Army was intended to be a fully interchangeable parts gun, in theory any unnumbered cylinder should function correctly in any New Model Army revolver. The gun is profusely sub-inspected throughout with the letters D and H on the barrel, B, H and W on the frame, B and H on the cylinder and with a D on the bottom of the brass triggerguard and on the bottom of each grip panel. The left grip retains an excellent and very clear script military inspector’s cartouche. The script initials are OWA and stand for civilian armory sub-inspector Orville Wood Ainsworth, one of the most famous and desirable of the mid-to-late 19thcentury US military inspectors. The top strap is clearly and crisply marked in three lines:

As noted, the gun remains in FINE overall condition and retains about 35%+ of its original blued finish overall. The majority of the finish loss appears to be from flaking. The left side of the barrel has flaked more than the right side, which retains most of its blued finish, as does the top and bottom of the barrel. The frame retains only traces of blue in protected areas on the left side with more finish present on the right. The cylinder shows moderate amounts flaking over all of its surfaces, with most of the remaining blue on the rear portion of the cylinder. The backstrap retains some thinned blue but appears to have lost most of its finish due to wear and use with mostly smooth plum patina over most of the grip frame area. The hammer retains about 80% of its original vivid color casehardened finish and the trigger retains much of its vibrant fire blued finish as well. The triggerguard has a medium golden patina. The areas of the barrel, frame, and cylinder where the finish has flaked has developed a mostly smooth brownish blue-gray patina, with some scattered freckles of surface oxidation here and there, with the most noticeable areas on the left barrel flat. All markings in the metal remain clear and crisp. The revolver is mechanically excellent and operates crisply, timing, indexing, and locking up exactly as it should. The bore of the revolver is FINE as well and is mostly bright and brilliant with crisp rifling and showing only some scattered surface oxidation. The grips are both numbered to the revolver and remain extremely crisp and sharp with fine edges and a wonderful cartouche. There is one moderate ding along the lower leading edge of the left grip panel, but otherwise the grips show only some lightly scattered dings and mars from handling and use.

Overall, this is an extremely attractive, crisp, and sharp revolver that displays wonderfully, as it has an honest “been there, done that look”, without being a worn out or over used revolver. The gun is mechanically crisp enough and has a good enough bore to consider using on the firing line of the N-SSA pistol competition as well. This is a high-quality pistol that it would be at home in any Civil War pistol collection that needs no excuses, is a 100% complete and correct Remington New Model Army with a low enough serial number to have actually seen service, and likely fought during the last year of the war. This is a very nice Remington Model 1863 New Model Army that will display well in any Civil War collection and that is priced a few hundred dollars less than most guns in this condition are priced these days.