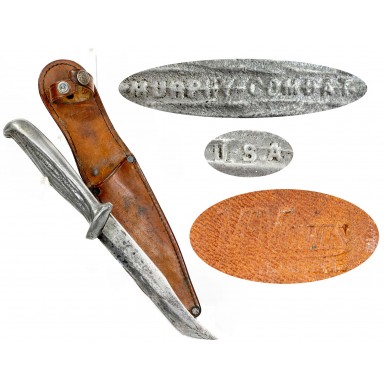 The Murphy Combat Fighting Knife was produced during World War II by David Z. Murphy and his son David M. Murphy. Murphy was a custom knife maker who first came to fame as the maker of the knives sold by the Gerber Legendary Blade Knife Company. The “Murphy” fighting knives are often categorized loosely as “Theater Knives”, even though they were not manufactured in a wartime theater of operations. They were, however, fighting knives manufactured for the explicit use of US military forces in combat during the Second World War. Murphy manufactured the knives in Gresham, OR and according to knife maker, researcher and author M.H. Cole, who interviewed David M Murphy, approximately 90,000 knives were produced during the war. This seems to be a very high number, considering the rarity of these knives on the market today. Several knife researchers and authors have postulated that either Murphy was simply incorrect in his estimate of total knives manufactured, or that somewhere along the line the production figures inadvertently received an extra “0” at the end, turning a much more believable total production of 9,000 into 90,000! The knives were produced in two sizes, a standard sized fighting knife with a nominally 6 1/8” blade and a smaller 5” bladed “Jr” combat knife. The smaller knives are much less often encountered than the larger ones, although both are hardly common and in fact tend to be quite scarce. The knives were produced with cast aluminum hilts and bright polished blades, which were manufactured from power hacksaw blades. The larger knife had the raised words MURPHY COMBAT cast into the obverse grip and U.S.A. cast into the reverse grip. The smaller knife was marked MURPHY COMBAT JR on the reverse grip and U.S.A. on the obverse. The knives were supplied complete with a leather scabbard that was contoured to the guard of the knife and had a grip-retaining strap, which was secured with a snap. Several companies apparently manufactured the scabbards for Murphy, with Hamley’s Saddle Works of Pendleton, OR providing the bulk of the scabbards. M.H. Cole identifies at least four known WWII era scabbards for Murphy combat knives in his books and assigns these variants the designators 1 through 4.

This Murphy Combat Fighting Knife is in VERY FINE condition. This is one of the larger knives, with a clip-point Bowie style blade that measures about 6 ½” with a nominally 3” false edge. The knife has an overall length of 11 ¾”. The blade is mostly bright and shows about 80%+ of its original polish. The blade shows some scattered oxidized surface discoloration and minor staining that is not nearly as prominent as it appears in the photos. In fact, when the bright surface is contrast with some of the duller areas of the blade makes this surface mottling appear to be darker discoloration in the photos that is not really present. As is typical of Murphy knives, the blade shows the “graining” or original machine marks from the manufacture of the hacksaw blades, which appears as minute longitudinal scratches that look almost like grain in wood. The blade shows some very minor scuffing and the light scratches that are typical of a blade that has been lightly sharpened. There are also a few tiny, freckled areas of minor pinpricking with age discoloration present, mostly near the tip. The cast aluminum hilt is crisply marked MURPHY COMBAT on the obverse and U.S.A. on the reverse. Since the aluminum hilts were cast, with the markings on them, they are sometimes blurred or weak. These markings are very crisp and clear, better than on the other Murphy knives I have owned. The knife is accompanied by its original “Number 3” variant (according to Cole) scabbard. The scabbard is stamped in two lines on the front of the belt loop section, McMONIES / PORTLAND, ORE. The W.A. McMoneis company was a leather goods, harness and saddle maker based in Portland. McMonies produced US M1916 holsters during WWI and presumably also produced M1907 slings and rifle scabbards. Today their leather fly fishing creels are highly collectible and bring very high prices. The leather scabbard is FINE condition as well and has clearly never been on a belt. The scabbard shows only some light scattered handling scuffs and some minor age discoloration, and some minor staining from storage. The original retention strap and snap are in place and function perfectly. The scabbard retains all of its original stitching, which remains tight throughout. The original reinforcing rivets are present on the upper corners of the scabbard, as well as attaching the belt loop and the retention strap. The rivets retain about 70%+ of their original blackened finish on the front and 20%+ on the rear, with the finish loss apparently from storage. The original and correct “flower” pattern button with zinc coupler is in place on the retaining strap and remains in fine condition as well.

Overall, this is really an attractive example of a very scarce and desirable Murphy Combat World War II Fighting Knife.  The knife is really fine condition, and the scabbard is in wonderfully crisp condition as well. This knife would be a wonderful centerpiece to any collection of World War II era fighting knives and really deserves a place in a very advanced WWII edged weapons collection.