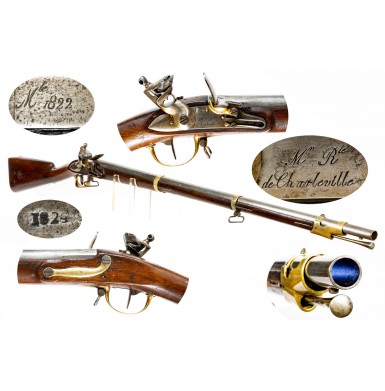 In June of 1815 Napoleon was defeated by the united forces of the Seventh Coalition under the command of Great Britain’s Duke of Wellington, bringing roughly three decades of French wars to an end. With the return to monarchy from the imperial government of Emperor Napoleon’s First French Empire, the French military looked to the future and tried to rebuild its forces and infrastructure.

During the course of the Napoleonic Wars some 3,000,000 soldiers, both French and their allies, had been under arms at one time or another. Roughly 1,200,000 men has seen simultaneous service during the peak of the wars, with roughly half of them being regular army troops of the French and their allies. Some 800,000 men had died on the French side during the war, both from combat and disease. All of this took an immense toll on the French military structure and by the time Louis XVIII took power at the conclusion of Napoleon’s reign, the French military was in need to complete rebuilding.

Part of that process was the adoption of a new series of small arms. Designated as the Model of 1816 family of arm, it consisted of at least eight different weapons, including five long arms. The long arms were all muskets, designated for use by the Light Infantry, Grenadier’s, Artillery, Cavalry and Navy. Despites the millions of arms that had been produced during the course of the Napoleonic Wars, few remained serviceable, with many lost, damaged and captured in service. Further, many of the arms were still based upon the Model 1777 which was nearly four decades old. Others were of the AN IX (Year 9) series of arms, adopted with the beginning of the French Republican calendar year 9 on September 23, 1800. These arms were improved versions of the earlier M1777 series and during the Napoleonic era many M1777 arms were upgraded to “corrected” to the AN IX standard.

The new Model 1816 series of arms was also strongly influenced by the earlier French designs with most of the changes being in the lock, in an attempt to improve ignition and reduce misfires. The most obvious change was in the angle of the removable brass flash pan, a design feature that had been introduced in general French service with the M1777. The new pan angle necessitated the addition of high fence at the rear to prevent powder flash and debris from blowing back into the face of the soldier when the gun was fired. The French also adopted a tapered and coned flash hole to concentrate the flash from the pan into the change in the breech, abandoning the simple round flash hole of earlier French designs. The steel of the lock (frizzen) was also widened slightly and its geometry altered in the effort to improve the shower of sparks that resulted from impact of the flint. Otherwise, the guns generally resembled their M1777, M1777 Corrected to AN IX and AN IX predecessors with iron mountings predominating on most models, barrels secured with spring-retained flat barrel bands and stocks with a recessed cheek rest on the obverse. The new M1816 series were produced for roughly six years at the primary French arsenals of the period; Saint Etienne, Maubeuge, Charleville, Tulle and Mutzig. However, the locks were now marked as they were before the French Revolution and the period of 1st Empire, designating the arsenals as “royal”, rather than as “imperial” as they had been during Napoleon’s reign.

In 1822, the series of M1816 arms were technically replaced with the new Model 1822 series of arms. However, a more appropriate designation would likely have been M1816/22 and at least one author suggests Model 1816 “Corrected” to M1822. This was because in most cases the improvements were invisible to the naked eye. Instead, they revolved around the adoption of steel as the material used in several of the parts instead of wrought iron. Most of the internal lock parts including the tumbler, bridle and screws were now made of much stronger steel. Additionally, the barrels were produced of a better grade of iron, strengthening them to handle the newer, improved gun powders that were being developed in France. The Model 1822 was the last of the French series of flintlock long arms and would be officially replaced in 1840 with the new percussion ignition series of arms. As with most countries around the world, when the percussion ignition system was adopted the newest and highest condition flintlock arms were soon slated for alteration to percussion. For the French the majority of the Model 1816 and 1822 arms would soon be “transformed” to percussion and redesignated as Models 1816T and 1822T. Later many would also be rifled and have new sights added, changing the designation to M1816T bis or M1822T bis, with the designator “bis” which translates loosely to “encore” or “twice” indicating the gun had been altered a second time. Many of the percussion altered, transformed French M1816 and M1822 muskets saw used during the American Civil War, with the obsolete altered muskets being acquired by both sides in some numbers, although in larger quantities by Union purchasing agents. The end result is that all French Model 1822 and 1816 muskets are extremely rare today in their original flint configuration.

The Model 1822 would have a significant influence on American arms design as well. The musket would be “Americanized” with a low comb stock without a recessed cheek rest and be tested in 1835, with the model finally being adopted in 1840. Thus, the US Model 1840 Flintlock Musket (or M1835/40 if you prefer) would be generally derived from the French M1822. The French M1822 socket bayonet would also be copied almost exactly and be adopted by the United States as the Model 1835 socket bayonet.

Offered here is an extremely rare, original flintlock configuration French Model 1822 Artillery Musket. The M1822 Artillery was identical to the M1816 Artillery Musket with the exception of the use of steel in many of the lock parts and screws and the improved iron used in the barrel. The Model 1816/22 Artillery Musket was reduced size version of the standard infantry muskets with a shorter barrel, slimmer stock and slightly reduced caliber, all of which made the gun lighter and handier. The French M1816 Heavy Infantry Grenadier Musket had a 44 ½” barrel of 17.5mm (about .68 caliber) with an overall length of 59 ½” and a weight of slightly more than 9 ½ pounds. The Light Infantry Musket was shorter in overall length at about 56” with a 40 ½” barrel and was slightly lighter. Otherwise the guns were identical in caliber, both used three flat spring retained bands to secure the barrel, had iron mountings and sling swivels mounted on a stud forward of the triggerguard and on the middle barrel band. The upper barrel band was double-strapped as they had been in French service for nearly 100 years and a blade front sight was mounted on the rear strap. No rear sight was included in the design. The ramrod was trumpet shaped and a small lug for a socket bayonet was brazed under the barrel about 1 3/16” from the muzzle. The stock retained the classic French form with a medium comb and a recessed cheek rest on the reverse. The Artillery Musket variation was significantly reduced in scale with an overall length of about 51 ½” with a nominally 36 ¼” barrel that was slightly reduced in caliber to 17.1mm (about .66 caliber), or what the British would consider “carbine” rather than “musket” bore. The gun was about a pound-and-a-half lighter than the Grenadier Musket, weighing in at about 8 pounds. The mountings of the artillery musket were of brass rather than iron, with only the trigger plate and swivels being made of that material. All other furniture, including the buttplate, barrel bands and side plate were of brass. As with the other French arms of the period the model designation was engraved on the breech plug tang as “Mle 1816” or “Mle 1822” if the gun was made with the improved steel lock parts and improved iron barrel. The arsenal of manufacture was engraved on the lock plate, the date of manufacture usually stamped on the upper left quadrant of the breech and the storekeepers mark with boxwood center plug applied to the obverse butt. French inspection and controller marks were found throughout on nearly every small part and parts were often assembly numbered as well since the guns were not produced on the principle of interchangeable parts. In 1832, the gun was also designated for use with Dragoons, with the only difference between the Dragoon and the Artillery variation being the elimination of the bayonet lug under the barrel for Dragoon service.

This French Model 1822 Artillery Musket remains in NEAR FINE condition, and as noted is in its original flintlock configuration, having somehow escaped the alteration and percussioning programs of the 1840s in France. The barrel remains full-length and the gun is 100% original and correct in every way. The lock of the musket is clearly engraved in script in two lines:

This indicates the musket was produced at the Royal Amory at Charleville, arguably the most famous of the French arsenals during the 18th and 19th centuries, and the one responsible for giving the nickname to the early US Model 1795 arms as “Charleville” pattern guns. The breech plug tang is engraved Mle 1822 and the breech of the barrel is dated 1824. The gun is sub-inspected throughout, primarily with a raised S in an oval cartouche and nearly every external part down to the screw heads is numbered 23. Internally, the lock parts are all numbered 25, the subassembly number of the lock with the plate numbered 23 mating it to the gun. The obverse stock is deeply struck with the French ordnance storekeeper’s roundel with a deep MR (manufactory royal) stamped into the boxwood plug in the center of the mark. The gun has been cleaned in the European fashion and the iron barrel is starting to tone down to a medium pewter gray color with an evenly distributed and scattered salt and pepper look from old surface oxidation and some pinpricking. The pinpricking is more serious around the breech and there is some very light pitting in this region as well. All of the markings in the metal are crisp and clear, with only the barrel date being a little weak at the “4” in 1824. The lock is fully functional and remains mechanically excellent with an old flint in the jaws that still sparks well on the steel (frizzen). All of the lock parts are original to the gun, including the hammer and top jaw, parts that are often replaced. The gun retains both sling swivels and the correct pattern, original French trumpet shaped ramrod. The rod is full-length and retains fine threads at the end. The brass mountings have been lightly cleaned and are toning down to an attractive, medium golden color. The bore of the musket remains in VERY FINE condition. It is mostly mirror bright and perfectly smooth with only some very lightly scattered freckled oxidation and discoloration. The stock remains in FINE condition and is very crisp with fine, sharp edges throughout. The stock is full-length and free of any breaks, cracks or repairs. It does show scattered bumps, dings and minor surface mars, as well as a small chip at the upper rear of the lock plate. The stock has not been sanded and the storekeeper’s roundel remains crisp.

Overall this is really attractive and very crisp example of a scarce French Model 1822 Artillery Musket. As noted, the gun is in a very nice state of preservation with all matching parts, is 100% complete and correct and remains in its rarely encountered original flintlock configuration. These guns were produced in significantly smaller numbers than the infantry variety of the musket and it is somewhat amazing that it somehow escaped conversion to percussion. This would be a fine addition to any collection of 19th century French or European marital arms and is a textbook example of one of the specialty patterns of French M1822 long arms, the last of the French military flintlock muskets.