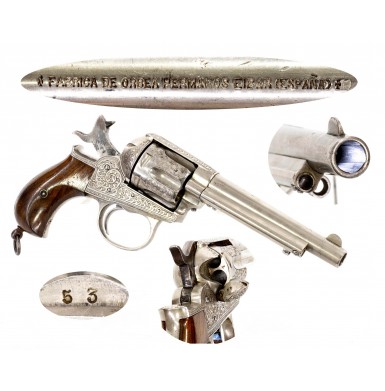 In 1877 Colt introduced their first double-action revolver, a design intended to compete with double-action designs that were being offered by their major competitor, Smith & Wesson. The gun smaller and more elegant in shape than the larger Model P (Single Action Army) with a rounded frame and a “Bird’s Head” grip. The revolver was initially offered in three mid-sized calibers, .32 Long Colt, .38 Long Colt and .41 Long Colt, which received the nicknames of “Rainmaker”, “Lighting” and “Thunderer” respectively, courtesy one of Colt’s largest distributors B. Kittredge & Company of Cincinnati, OH. As with any Colt handgun of the period, the revolvers were offered in a dazzling array of barrel lengths, with and without ejector rods, in either nickel or blued finish and with a number of optional grip materials in addition to the standard checkered hard rubber. Other custom features allowed factory embellishments, like engraving. The .32 caliber variant did not remain in the product line very long, but the two other calibers were rather successful and the Lightning and Thunderer both remained in production well into the first decade of the 20th century, with more than 166,000 Model 1877 revolvers being produced before the product line was dropped at the end of 1909.

Like all Colt products of the mid-to-late 19th century, European made copies quickly appeared on the market. While many of the earlier production percussion guns were produced in places like Liège (Belgium) and in Innsbruck (Austria) were manufactured under a licensing agreement with Colt, many were not. The legally produced guns were often marked with the French term “Brevete”, meaning “patent”, referring to Colt’s patented design and often included markings that indicated that the patent was being utilized under an agreement with Colt. Very quickly the “brevete” marking started to appear on unlicensed copies of Colt handguns as well, implying that they were “legal” copies. Today, that term has become a universal moniker for all European made Colt revolvers, whether legal, licensed copies or illegally produced patent infringement guns. The study of the Colt’s percussion “Brevete” revolvers has even resulted in the publication of literature on the subject, including the exhaustive Colt Brevete Revolvers by Roy Marcot & Ron Paxton. During the cartridge revolver period, it was the Spanish gunmaking industry that seemed to produce the most “brevete” Colts in Europe, primarily making copies of the famed Single Action Army. The Spanish makers also manufactured copies of Smith & Wesson and Merwin, Hulbert & Company revolvers during this period. Among the less often encountered Spanish-made Colt copies were those of the double action Model 1877 revolvers.

Offered here is a VERY FINE, factory engraved example of a Spanish Made Colt Model 1877 Revolver that was produced by Orbea Hermanos. The firm of Orbea Hermanos (Orbea Brothers) was established in 1840 in Eibar, which is located in the Basque region of Spain. Eibar can best be compared to Birmingham (England) and Liège (Belgium) as the major gunmaking center in the country. The firm was a partnership between three Orbea brothers; Juan Manuel, Mateo and Casimiro. Their first major production contracts were to provide handguns to the Spanish government. This firm produced the Spanish copies of the English Kerr Revolver, initially in percussion and later in cartridge. Once the cartridge period was entered, they produced a large number of large frame Smith & Wesson top-break revolvers, as well as Colt copies. By the last quarter of the 19th century, Orbea Brothers was pioneering the use of electricity to operate the machinery in their factory. As the 19th century drew to a close, the Orbea Brothers renamed their company Orbea Brothers & Co. Like most European gunmakers, the firm was extremely busy producing firearms during the years leading up to the Great War and through the end of the war. In post-First World War Europe, the company found a very weak market for guns and turned their metal working expertise, particularly in producing the steel tubing used in gun barrels, to the production of bicycles. By 1930, the firm had left the firearms business completely and started to become one of the most prominent bicycle makers in Spain. The firm remains in business today as one of the world’s premier cycle makers, manufacturing bicycles for everything from pleasure riding to mountain bikes, to competition level cycles.

As noted, his Orbea Brothers Revolver is a factory engraved copy of a Colt Model 1877 “Lightning”. The gun is approximately 9 ½” in overall length with a 4 ½” round barrel. The 1 7/16” long, six-shot cylinder has traditional flutes that measure 1” in length. The bore of the revolver is nominally about .40 caliber or 10mm and the gun is probably chambered for a European centerfire revolver round similar in power to original Colt chamberings of .38 and .41 Long Colt. The gun is clearly marked on the top of the barrel in a single line, flanked by a pair of Maltese Cross symbols:

The revolver is serial (or assembly number) 53. The number is present on the bottom of the frame and on the loading gate. The revolver is nickel plated and retains the large majority of the original nickel finish, probably 95% or so. The gun shows some minor finish loss due to flaking and wear along the high edges and contact points; this is most obvious at the muzzle and the backstrap. There is some freckled surface oxidation here and there and some additional loss from wear on the gripstrap and backstrap. The gun is very neatly engraved with tight foliate Arabesque scrolls with near full coverage on the frame, as well as the recoil shield and topstrap. The cylinder is engraved en-suite between the flutes, with additional decoration on the triggerguard and backstrap. The engraving all remains very crisp and clear, as does the barrel marking. The revolver has a lanyard ring in the butt, a feature not typical for Colt revolvers of the period and likely an “improvement” from Orbea Brothers. The action also features a mechanical upgrade not found on the Colt revolvers of the period. As the firing pin on the Colt designs of the M1873 and M1877 was attached to the face of the hammer, there was always the possibility that the gun could accidently discharged if it was dropped and landed on the hammer or if the hammer was struck with a hard blow. The only truly safe was to carry these guns was with the hammer down on an empty chamber. The Orbea Brothers resolved this problem by incorporating a rebounding hammer design. After the trigger is pulled, the hammer “rebounds” to a safety notch that prevents the firing pin from contacting the primer of the cartridge until the trigger is pulled again. While rebounding hammer and firing pin designs are common safety elements in modern revolver design, it was quite innovative during the latter part of the 19th century. The gun remains in FINE mechanical condition and operates perfectly in both single and double action modes and times, indexes and locks up crisply and correctly. The rebounding hammer mechanism works perfectly as well. Other than the mechanical improvement, in all other ways the revolver conforms to the typical Colt M1877 design with a solid frame, hinged loading gate and spring tensioned ejector rod attached to the right side of the barrel. The loading gate and ejector operate correctly as well. the bore of the revolver is also in FINE condition and remains mostly bright with crisp rifling, showing only some scattered light oxidation and minor pinpricking, along with some frosting in the grooves. The revolver is mounted with a pair of highly figured hardwood grips that are lightly varnished and remain in FINE condition as well. The grips are solid and complete and are free of any breaks, cracks or repairs. The retain much of their original finish, with some scattered bumps, dings and light handling marks, but show no abuse or excessive wear.

Overall this is really a VERY FINE example of a scarce Factory Engraved Spanish-Made Colt Model 1877 Revolver. While lower quality European Colt and Smith & Wesson copies appear on the market with some regularity, high grade examples like this, particularly of the double action M1877 pattern are quite scarce. This would be a wonderful addition to any collection of Colt “Brevete” revolvers, an advanced late-19th century European revolver collection or as an interesting addition to a collection of Colt revolvers, particularly to M1877s. The quality of construction and lovely engraved embellishments make this a “lot of gun for the money” as one of my friends in this business likes to say. I am quite sure you will be very glad to add this to your collection.