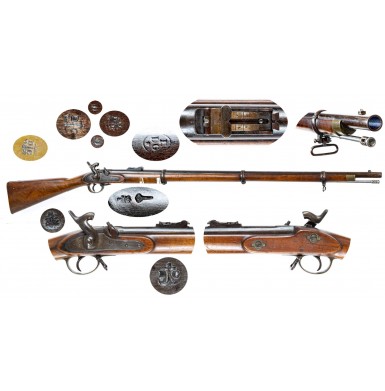 Fine Belgian Made P1853 Enfield by OP Drissen of Liège

The varieties of arms produced by the gunmaking center of Liège during the mid-19thcentury was absolutely mind boggling. High quality, Belgian made copies of nearly every major form of military firearm were available to willing buyers. While much of the Belgian output were Liège-made copies of French pattern military arms, the British Enfield pattern arms were produced in large numbers as well. In fact, the crisis created by the Crimean War resulted in English contracts for Belgian made Pattern 1853 Enfield Rifle muskets, as well as artillery carbines and short rifles. The Belgian makers had long been a source for British military arms during times of need and had been providing component parts to the Birmingham gun trade, particularly barrels, for at least a century. Thus, the Belgians were a logical choice to help produce more Enfields during the war in the Crimea.

The major conflict to burst upon the world state was the American Civil War. The Belgian makers were soon working overtime to produce weapons to help arm the belligerents on both sides, as well as to supply their regular clients around the world. One of those clients were the Brazilians, who were acquiring Belgian made rifle muskets, rifles and carbines of various patterns, often based upon English designs. The firm of O.P. Drissen is particularly well known to collectors of Civil War arms as the source for the “Brazilian Light Minié Rifles” that were apparently diverted from their original Brazilian buyers to US agents, buying arms for the Federal government.

The firm of O.P. Drissen & Company had been established in Liège and remained in business through 1874, producing a wide range of arms. It is worth noting that the American Civil War clearly impacted the firm’s business, as in 1861 they proved only 4,820 “muskets” at the Liège Proof House, but the following year proved 14,233; a nearly three-fold increase in output. The following year, in 1863, the firm proved 12,221 “muskets.” However, by 1864, the number of similar arms proved at the Liège proof house was only 595. This sudden reduction in output coincides with the July of 1863 cancellation of all foreign arms contracts by the US government. These numbers, and their sudden reduction after the US foreign arms purchasing program came to an end, suggest that much of the Drissen output for 1862 and 1863 was destined for US buyers.

In addition to the “Brazilian Light Minié Rifle”, Drissen also produced direct copies of the British Pattern 1853 Enfield Rifle Musket. It is difficult to know if these guns were imported by the United States as well, but as they were well executed copies, they would likely pass as British Enfields for the average US buyer’s agent or inspector. As such, they would almost certainly not be listed as “Belgian Enfields” in primary source documents, but simply as “Long Enfields”. Only a close inspection would reveal that the locks were not marked with the Birmingham “Tower” mark or with the name of a London contractor, but rather with the trademark of the Drissen company, an Anchor, flanked by a D and a C. This D – (ANCHOR) – C mark is found throughout most of the Drissen marked guns and has led to some confusion in the collecting community. Some early collectors felt it was a US naval mark, while other have conflated the mark with the Confederate JS / (ANCHOR) inspection mark. It is neither, simply the maker mark of the Drissen company.

Offered here is a FINEcondition example of a Belgian Manufactured Pattern 1853 Enfield Rifle Musket by the O.P. Drissen Company of Liège. The gun is a straight duplication of a Birmingham contractor produced P1853 Type III, with a 39” barrel that is .577 caliber and rifled with three grooves. The gun has an overall-length of 55” and a 14” length-of-pull. Although the length-of-pull had been officially reduced from 14” to 13” in late 1859 and was codified by the British Board of Ordnance by early 1860, most contractors never adopted the 1” shorter stock until the post-Civil War period. During the Civil War period, only the guns produced by the Royal Small Arms Factory at Enfield and the London Armoury Company adopted the shorter butt stock pattern. The gun has the standard “Type III” Palmer patent clamping bands with screw retaining washers, a 1,000-yard ladder read sight, and the expected jag-head ramrod secured by a spoon in the stock. Without looking at the marking on the lock or barrel, one would not know that this was not an English Enfield.

The lock is clearly marked with the Drissen D – (ANCHOR) – C mark, as is the neck of the hammer. The mark also appears twice on top of the breech, behind the rear sight, on all three barrel bands and on the tang of the brass buttplate. The top of the breech is also marked with a pair of script D marks on either side of the nocksform. The lock is marked with the Drissen mark on its interior as well, forward of the mainspring and with a small (CROWN) / LLover the mainspring, along with the initials N, L and D. The top edge of the lock plate is marked with the file slash assembly mating code /  \ | /. This same mating code appears inside the lock mortise of the stock, on the interior of the hammer neck and under the barrel, as well as on the necks of the screws. The (CROWN) / LL mark is also found inside the hammer neck and under the barrel.  The bottom of the barrel is marked with the DrissenD – (ANCHOR) – Cmark twice, the number 14, with a script EL and with the mating number 755 on both the bottom of the barrel and on the rear of the breech plug. A slightly weak script EL cartouche is present on the obverse buttstock.

As noted, the gun remains in about FINE condition. The lock retains some faded trace of original color case hardening, having a smoky, slightly mottled color and patina.  All marking on the lock and other exposed metal remain quite crisp and clear and all such marks are legible. The barrel retains about 20% of its original faded and thinned blue on the barrel, which has blended with a mostly smooth plum-brown patina on the exposed metal. There is also some old dried grease on the metal, which has discolored to medium chocolate brown color. The underside of the barrel retains about 80% of the original blue, which has faded and dulled somewhat and shows some scattered surface oxidation. The exposed portion of the barrel and the bands show some scattered surface oxidation as well, some pinpricking around the breech and bolster and some lightly scattered areas of minor surface roughness. The bore of the gun is in VERY FINE condition. The bore is mostly bright with fine rifling and showing only some minor frosting in the grooves and some very lightly scattered minor pinpricking. The bore shows some scattered dirt and dust that would surely clean out with little effort. The lock remains in FINE mechanical condition and functions perfectly on all positions. The gun retains its original and complete adjustable ladder rear sight, which remains fully functional, as well as the original combination front sight and bayonet lug. The gun retains both sling swivels and all three of the barrel bands retain their original screw retention washers. What appears to be the original ramrod is present, it is full-length and retains very good threads on the end. The rod appears to be weakly marked H&FS near the head. The stock remains in about FINE condition as well. The stock is solid and full-length and free of any breaks or significant repairs. The stock retains fine lines and edges and is quite crisp, with no indication of having been sanded. There is a small grain crack running from the rear lock screw to the barrel channel that has been glued. This is a common issue with all muskets, as over-tightening the screw can often create a crack in this location. The only other condition issue worth noting is an old chip out of the forend on the reverse, between the two upper bands. The chip is about ¾” long and a ½” wide and shows wear indicating that is likely from the period of use and is certainly not recent. Otherwise the gun shows the scattered bumps, dings, mars and scuffs that would be expected on a 150-year-old military pattern arm.

Overall this is a FINEcondition example of a scarce Belgian Manufactured Pattern 1853 Enfield Rifle Musket by the O.P. Drissen Company. While I have seen numerous Belgian P1853s over the years, I have never before seen or had the opportunity to offer a Drissen-made P1853. This would be a wonderful piece to display with a Drissen manufactured Brazilian Light Minié Rifle, or to add to any collection of Enfield pattern arms. The condition, quality and scarcity of the maker all combine to make this a very attractive and interesting Enfield variant that might have been part of a Civil War small arms contract or might have served the military of some other country during the mid-19thcentury.