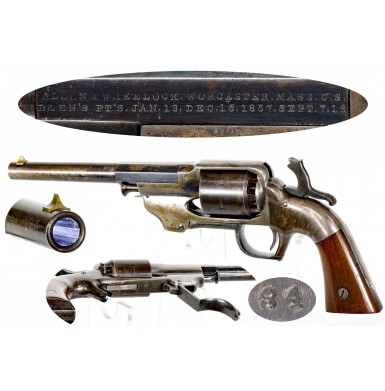 The Allen & Wheelock Center Hammer Army percussion revolver was manufactured in rather limited quantities, with production estimated by most published arms historians at only about 700 guns. These estimates are based primarily upon the “serial numbers” of known surviving examples. However, for a gun with production figures so low, the survival rate of the revolvers appears relatively high, leading some to assume that the “serial numbers” were really batch or assembly numbers and do not really indicate total production. In fact, many have long believed that the total production was likely three to four times the published estimates. The existence of at least a couple of duplicate “serial number” examples certainly supports this theory. In my opinion the actual production figures were likely in the 2,500 to 3,000 gun range.

No matter how many were actually produced, we do know that 536 were purchased by the Federal government in 1861. Nearly all those guns were subsequently issued to the 2nd & 3rd Michigan Volunteer Cavalry regiments. These revolvers were purchased on the open market, not through an Ordnance Department procurement contract. As a result, they were not marked with any US military markings. The small letter sub-inspection marks on the metal and cartouches on the grips are only found on the revolvers acquired via an official Ordnance Department contract. This means that there is no way to verify whether an Allen & Wheelock Army revolver is a US military acquired gun or not, other than the few “serial numbers” that have been found in various records.

The Allen & Wheelock Army Revolver was a .44 caliber, six-shot, percussion single action revolver that had a 7 ½” half-round and half-octagon barrel that utilized a unique ratcheting loading lever that formed the trigger guard of the revolver. The frames, cylinders and barrels of the revolvers were blued with the hammers and the combination loading lever and triggerguards color casehardened. The grips were smooth two-piece walnut that were usually varnished but appear to have been oil finished on some extant examples. Despite the relatively small number produced, the revolvers were manufactured in three distinct variants. These variations help the collector to categorize and date them chronologically.

The earliest guns used a complicated and fragile “hinged pawl” action. This produced a smooth action but was expensive and time consuming to produce and difficult to repair. These guns also had the hammer mounted on the screw that secured the side plate and entered through the right side of the frame. This made disassembly very difficult. The final feature of the 1st variant revolvers was that the cones (nipples) were screwed into the cylinder from the inside of the chambers, which was a very unconventional feature. The 2nd variant revolvers retained all the mechanical features and designs of the 1st variant but had cones (nipples) that were installed in the conventional fashion, from the rear of the cylinder. The 3rdvariant revolvers used a pin that was cast into the right side of the frame to provide a pivot for the hammer to rotate on, with the screw that secured the sideplate entered from the left side of the frame. This made the revolver much easier to disassemble and repair. These later guns also utilize a simplified internal action that was cheaper and easier to produce.

The guns were normally marked in two lines on the left side of the octagonal portion of the barrel with the name, address, and patent information about the gun, however, these stampings were often quite light and as a result are usually only partially legible. Since Allen was the ultimate “cheapskate” it was not uncommon for the company to use the same dies to mark different models of guns, even if the die did not quite fit in the space where the markings were to be applied. This resulted in Allen revolvers that often have letters and/or numbers missing from the name and patent information stampings, since the die simply did not fit in the area where it was stamped. It seems fairly certain that the guns were not “serial numbered” per-se but were marked on major parts with assembly numbers. The numbers were usually placed on the left side of the frame (under the grip), on the inner surface of the triggerguard portion of the loading lever, on the rear of the cylinder, on the cylinder arbor pin and inside both wooden grip panels.

The Allen & Wheelock Center Hammer Army offered here is in about FINE condition. It is a one of the mid-production, 2nd variant, revolvers with the complicated lockwork and the hammer suspended from the side plate screw, which enters from the right side of the frame. However it has the conventionally installed cone (nipples) that are screwed into the cylinder from the rear face, rather than from inside the chambers. The revolver is serial (or assembly) numbered 84. This two-digit number appears on the expected parts of the gun. The number is found stamped in the usual location on the frame under the left grip, on the rear face of the cylinder, on the inner face of the loading lever, on the flat of the cylinder arbor pin and on the interior of both grips.

The gun appears to be 100% complete, correct and period. Even the original, uniquely shaped brass front sight blade is in place, dovetailed into the top of the barrel near the muzzle. The gun retains some of its original blued finish, probably about 15%+ overall. It is very hard to find any Allen & Wheelock Army revolver with original finish as the guns tended to flake very badly. That means that when one is found with some finish on it, it tends to be somewhat mottled like this one, being a mixture of blued finish and exposed metal. This revolver retains the large majority of the original bright blue on the octagonal portion of the barrel, forward of the frame. The round portion of the barrel retains some moderate traces of blue, with the balance having flaked. The frame and cylinder retain lesser traces of blue, again being the victim of finish flaking. The gun remains extremely crisp throughout with sharp lines and edges. The metal of the gun is nearly entirely smooth, with some scattered freckles of lightly oxidized surface roughness here and there and some minor areas of pinpricking. This is most noticeable on the edges of the forward portion of the topstrap and on the frame in front of the cylinder chambers. This area would be exposed to erosive gasses whenever the revolver was fired. The areas of metal where the finish has flaked have developed a mottled brownish-gray patina with some areas of plum patina as well. Since the flaking was irregular, particularly on the barrel, it shows freckles of bright blue, thinned freckles of blue turning plum, and areas of pewter gray and oxidized brown patina. The frame and cylinder show a similar mottling of freckled bright blue, plum patina, and grayish brown metal with scattered light surface oxidation. The color casehardened hammer and loading lever/triggerguard have darkened to a deep bluish-black color and show only some traces of the mottled blues and other colors in the protected areas on the interior of the triggerguard. The case coloring on Allen parts was not nearly as vivid and colorful as that found on Colt and Winchester products but tended to be more muted. The bore of the revolver rates about FINE as well and is mostly bright, with strong rifling. The bore shows some scattered pinpricking and oxidation along its length and shows some moderate frosting in the grooves. Normally the guns are marked in two lines, on the left octagonal barrel flat and read ALLEN & WHEELOCK . WORCHESTER, MASS. U.S. / ALLEN’S PT’S . JAN . 13 . DEC . 15 . 1857 . SEPT. 7, 1858. In typical Allen & Wheelock fashion the markings are from a die that is too big to fit in the space provided, leaving some of the marking missing. On this gun, the two-line stamping actually reads:

While the first line of the stamping is actually compete, the second line is missing the first letter in the word “Allen” and the last two numbers of the date. Allen & Wheelock markings are notoriously light, but in this case the markings are relatively crisp and bold, so they remain fully legible.

The pistol functions correctly and remains extremely crisp mechanically. The revolver times, indexes, and locks exactly up as it should. The loading lever functions correctly and smoothly and operates exactly as it should. All of the six cones (nipples) are original, and they are in very good, crisp, and usable condition. The walnut grips rate about VERY GOOD+ to NEAR FINE overall. The grips would rate “fine” were it not for a small slivered chip missing along the rear edge of the left grip. The grips retain the large majority of their factory varnish, probably around 80%+. The grips do show some wear and use, with scattered light surface dings and mars from handling and use and some more moderate marks on the bottom of the right grip panel. Overall, the condition of the grips matches the balance of the gun very well.

Overall, this is an extremely nice example of a mid-production Allen & Wheelock Center Hammer Army percussion revolver. The gun remains in very crisp, complete condition, and displays well with some nice original finish. Several revolvers close to the number of this gun are listed in the Springfield Research Service Serial Number Book #4, with numbers 61, 65, 68, 86 and 88 all being listed as having been in the possession of I troop of the 3rd Michigan Cavalry during 1864. As only two small record groups of Allen & Wheelock Army serial numbers are known, Troop I 3rd MI Cavalry and Troop A 2nd MI Cavalry, it is quite likely that this gun was issued to another Troop of the 3rd MI Cavalry. This Allen and Wheelock revolver is head and shoulders better than the majority of the surviving examples available today. This would be a wonderful addition to any advanced collection of secondary martial revolvers and will certainly be a fine addition to that grouping.