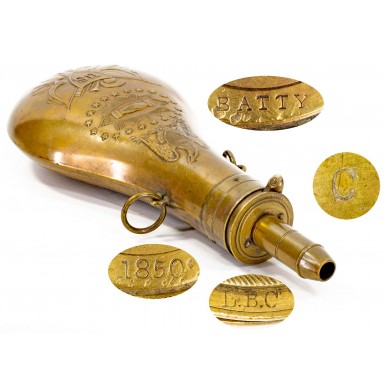 This is a very nice looking and fairly priced example of the US rifle powder flask known to collectors as the Peace Flask. These flasks were produced by Batty and Ames from the early 1840s through the mid-1850s, for use with the US Model 1817 “Common” Rifle and the US Model 1841 “Mississippi” Rifles. The flasks received their nickname due to the embossed motif of two hands shaking, surrounded by a ring of stars. The flask also has the American Eagle and panoply of flags and arms motifs embossed on the body. This flask is a mid-production Batty flask and is dated 1850 on its top. It features the later production pattern round sling rings, instead of the earlier triangular suspension “rings”. The flask as has a lovely golden butterscotch patina that appears to be uncleaned and  untouched. The top of the flask is marked BATTYon one side of the charger and 1848 on the other side. Diagonally from the date mark is a clear L.B.C. inspection mark. The initials are those of a yet to be identified US Ordnance Department civilian sub-inspector who apparently inspected Batty flasks during 1849 and 1850 and whose initials are also found on the barrels of some Robbins & Lawrence produced US M1841 Rifles during the same period. The throat of the flask is marked with the inspector’s initial C as well, probably the mark of the same, unknown “LBC” inspector. The original adjustable charger spout is in place on top of the flask. The spout is frozen at the lowest of the three different charger positions. Applying some penetrating oil might release the spout to adjust as it should. The original charger lever is place and functions exactly as it should. The body of the flask is nearly perfect on one side, with the other side showing a couple of minor pushes and light marks from use. The seams of the flask are all intact and the body shows no cracks or repairs. The flask has a very attractive look and although it appears to have seen service, it was not abused. This is an extremely attractive, complete and correct Peace Flask that would be a great addition to your Common Rifle or Mississippi Rifle display. If you are only going to have one flask in your collection of 19th Century US militaria, the Peace Flask is the best known and the most recognizable example that you could have.