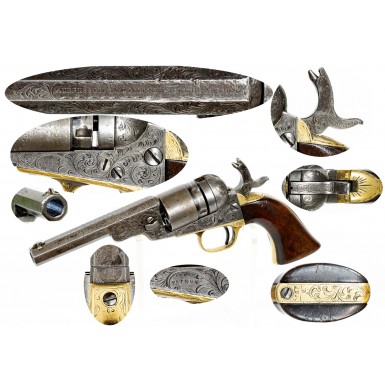 At the close of the American Civil War the Colt Patent Firearms Company was aware of two facts that would greatly impact their business practices for the next decade. First, the end of war not only meant no more major US military orders for handguns in the foreseeable future, but it also meant that thousands of surplus US military percussion revolvers would soon be flooding the market, making newly made percussion revolvers difficult (if not impossible) to sell. Second, the day of the percussion revolver was over, and the new self-contained cartridge handgun was the wave of the future. Unfortunately for Colt, Smith & Wesson held the exclusive rights to Rollin White’s patent on the bored-through cylinder, which meant that until that patent expired in 1869 there was no easy way for Colt to manufacture a traditional cartridge revolver without infringing upon that patent. Colt also had thousands of parts on hand to produce the many models of percussion handguns that had been its bread and butter business since the firm was founded. Immediately the designers were put to work to find reasonable ways to manufacture cartridge handguns from the parts on hand, as well as how to convert existing percussion revolvers to cartridge handguns. Although the possibilities for both production and conversion were somewhat limited until the expiration of White’s patent, the designs patented by F. Alexander Thuer in 1868 and 1870 allowed Colt to offer Thuer conversions of all their popular percussion models as an interim product line, until bored through cylinders could be used. The Thuer system was not particularly successful and only about 5,000 Thuer altered revolvers of all models were produced. It is interesting to note that the first of the Colt “bored through cylinder” cartridge revolvers to be offered after the expiration of White’s patent were not alterations of existing models, but were two completely new product lines, the .22RF Colt Open Top revolvers and Colt Cloverleaf Pocket Revolvers. Following their introduction Colt started to produce the Richards and Richards-Mason conversions of their larger framed revolvers, including the Model 1860 Army and the Model 1851 and Model 1861 Navy models. These were produced both as newly made guns, using percussion revolver parts on hand, as well as true conversions of previously manufactured revolvers. In total about 9,000 M1860 Army Richards conversions were produced, with an additional 2,100 Richards-Mason Army models manufactured. About 3,800 M1851 Navy revolvers were altered to .38 caliber (both rimfire and centerfire) and another 2,200 M1861 Navy revolvers were so altered.

The single largest batch of altered, converted or remanufactured revolvers were in the 1862 Police and Pocket Navy sizes, all altered to .38 caliber, in either rimfire or centerfire. Colt produced 24,000 cartridge revolvers on this mid-sized frame between 1873 and 1881, with at least 5 model variations and configurations. For the ease of identifying these guns for modern collectors, the guns have essentially been divided into categories based upon their barrel profiles (octagon or round), barrel lengths and the presence or absence of an ejector system (and sometimes loading gates). In some cases, the guns were made almost completely from left over percussion parts on hand, were sometimes made by altering completed percussion guns on hand, and were sometimes a hybrid of old, surplus parts and newly made parts. To make matters more confusing the presence or absence of features like loading gates and barrel addresses almost appear to be random on some “models”, and to further muddy the waters, these mid-sized .38 cartridge revolvers were produced in three different serial number ranges! These guns are found serial numbered in the upper regions of the Model 1849 Pocket serial number range (between about 274,000 and 328,000), in the upper regions of the Model 1862 Pocket Navy and Police ranges (found between about 36,000 and 48,000) and in their own range of about 1-19,000. The guns were manufactured between 1873 and 1880/81 with most of the new serial number range guns manufactured between 1873-1875, and the balance of the guns primarily being produced c1875-1880. In all cases, the unsold stock remained on hand, and in many cases was still shipping in the mid-to-late 1880s.

Offered here is a VERY GOOD+ example of what collectors refer to as the 4 ½” Octagon Barrel Revolver (Flayderman’s 5B-127). Bruce McDowell, in his reference A Study of Colt Conversions and other Percussion Revolvers, the author assigns the designation of Model 1862 4 ½” Octagonal Barrel Pocket Navy Conversions. All of these alterations were originally chambered in .38 Rimfire, although McDowell notes that some were later re-altered to centerfire. This example is one of those extremely scarce center fire revolvers. It is even rarer in that it is a factory engraved example. While many of the other similar .38 cartridge guns that Colt produced during this era were based upon the frame and cylinder of the 1862 Pocket Navy & Police series of handguns, using various left over and newly made parts, this one is an actual alteration from percussion to cartridge. This is discernable by the factory engraving.  The revolver was engraved in its original percussion configuration, which is easily distinguishable by the fact that the loading cut out in the frame cuts through the engraving, so that the pattern ends abruptly. The serial number of the revolver, 9685, indicates the revolver was originally produced in 1862. The presence of both E and I markings with the serial number indicates that it was originally factory engraved and had factory ivory grips. The fact that the loading lever aperture in the frame was not filled as part of the alteration process suggests to me that that the revolver was likely RETURNED to Colt for alteration to cartridge by the owner, and not a gun that was “new old stock” languishing in inventory unsold from a decade earlier. Examination of the added centerfire firing pin on the hammer indicates that although McDowell discusses “re-alterations”, guns that were converted to .38 Colt CF from .38 RF, this gun was never a rimfire gun. The rimfire firing pin was attached by machining a slot on the left side of the hammer nose and attaching the firing pin with two pins. This would have destroyed the “wolf’s head” engraving on the hammer nose. Since the engraving remains intact, it is clear the hammer was never rimfire, but simply had a centerfire firing pin added to the center face of the hammer.

As noted, the revolver is serial number 9685 and was originally produced in 1862 as a Model 1862 Pocket Navy percussion revolver. The matching serial number 9685 is found on the triggerguard, on the bottom of the frame, on the bottom of barrel web, on the butt, on the cylinder and on the arbor pin. The wedge is a typical late production, cartridge conversion era unmarked wedge without a spring. The varnished walnut grip has a partially legible ink serial number that cannot be fully deciphered and may or may not match the gun. The presence of both an I and an E below the serial number on the frame indicates not only factory engraved but also factory ivory grips. It is not clear if the wood grip was a replacement added at the time of alteration to cartridge or one that is a later replacement due to damage or loss of the original factory ivory grip. The “E” for “engraved” is present with the serial number on the barrel web and butt as well. The fact that no conversion or alteration mating numbers were added to the gun further indicates that it was a customer’s gun returned to Colt for alteration to cartridge. The rebated cylinder is clearly marked COLT’S PATENT followed by the serial number and retains about 50%+ of its original, roll-engraved “Stagecoach Holdup” scene. The left side of the frame is clearly marked with an arched two line: COLT’S / PATENT marking, typical of those guns that were factory engraved during the percussion era. It does not have the later period two-date in two-line patent mark. The left rear web of the triggerguard web is stamped 36 CAL. The octagonal barrel is roll marked in a single line: ADDRESS COL SAMLCOLT NEW-YORK US AMERICA. The revolver has a fully engraved frame, barrel web and hammer with the flowing foliate scrolls that are typical of factory engraved Colts of the period. The barrel webs incorporate flowing foliate and geometric ribbon motifs and the sides of the hammer are engraved with the classic “wolf’s head” motif that is more likely a sea serpent or some similar mythical beast. The top flat of the barrel and edges of the triggerguard are cut with geometric dash style boarders. A similarly engraved M1862 Round Barrel Police conversion revolver is pictured on pages 332 & 333 of McDowell’s book and is attributed to Gustav Young. It is unclear which Colt engraver enhanced this revolver, but it is clearly factory work.

As previously noted, the revolver is in about VERY GOOD+ condition. The gun retains some traces of original blued finish in protected areas, under the barrel, around the web and wedge and in the rebated edge of the cylinder. As much as 10% blue may be present. Some traces of silver plating are present under the grip on the brass gripstrap and the hammer retains some minute traces of faded case color with hints of grayish mottling. The balance of the gun shows a lightly oxidized brownish patina over a dull pewter base color, with scattered surface dents and dings from carry, handling and use and some small patches of lightly scattered minor pitting. All of the markings and engraving remains clear and crisp. The cylinder shows only about 50% of the roll scene and has as a lightly cleaned, medium pewter patina with some scattered light surface oxidation and some pinpricking. Like the barrel, the cylinder shows a few impact marks as well. The bore of the revolver is in VERY GOOD condition and remains mostly bright, with sharp 7-groove rifling its entire length. The bore shows scattered oxidation and scattered light pitting along its length. The original brass post shaped front sight has been replaced with a dovetailed blade during the period of use. The gun is mechanically VERY GOOD and indexes, times, and locks up perfectly, with the hammer responding crisply to the trigger. The walnut grip shows moderate wear, with some minor chipping to the leading edges. The grip remains solid, but does show scattered bumps, dings and mars.

Overall this is a really nice example of a Factory Engraved Colt M1862 Pocket Navy Cartridge Conversion Revolver. The gun remains in nice, used but not abused condition and appears all correct and period with only the replaced grip potentially not being part of the original factory work. The engraving and markings are clear, and the revolver remains fully functional. This would be a nice addition to any collection of engraved Colt revolvers, particularly a collection of early “Old West” period conversion guns. It displays well and I am sure you will be happy with this revolver in your collection.