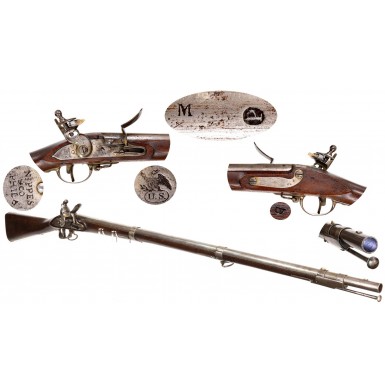 Research by the late George Moller, published in Volume II of his three volume set US Military Shoulder Arms, reveals that between the end of the Revolutionary War and 1808 the state of Maryland purchased no small arms. Starting in 1808 the state began to acquire small quantifies of small arms, with the first purchases limited to rifles. Between 1809 and 1812 a total of 3.050 muskets were issued to state the by the Federal Government under the Militia Act of 1808. An additional 4,550 were purchased by the state during this time, primarily from funds provided by the Federal Government. These funds had been advanced against the arms due to the state from the Militia Act which were not available for issue by the Federal Government due to the pressing need for arm during the War of 1812. During the course of the war Maryland acquired an additional 5,832 muskets. These guns were mostly obtained through J J Henry of Philadelphia, who not only supplied arms that he made, but apparently also served as the sales agent to acquire arms from other makers on behalf of the state. Between 1813 and 1815 Henry directly supplied 4,937 arms to the state. Of those he appears to have produced somewhat more than half, with makers like Daniel Henkels, James Brooke, Edward Evans, and John Miles all supplying additional arms. Moller notes that some of the guns delivered by Henkels, which are noted as having been 831 guns, were either made by the Nippes & Company or at least used Nippes marked locks.

The guns delivered by these various contractors were all of the “1808 Contract” pattern, which is a generic term at best. This is because the sample guns that had been issues to the various Federal contractors when the contracts were first issued were far from consistent. All were “Charleville Pattern” arms, as the first US musket design was based loosely on the French Model 1766 Charleville Musket. The model designation “1795” is a modern collector term and was not used during the period. The guns made at Harpers Ferry and Springfield only resembled each other and in numerous features were different. To make things more confusing, both arsenals went through a developmental and improvement process during the period of production that were independent of each other. This meant the contractor produced arms were interpretations of the sample arms provided, and the sample arms themselves were not remotely identical.

The guns provided to contractors by the Harpers Ferry Arsenal were typical of their US Model 1795 musket production circa 1803, while the arms supplied to contractors by Springfield Arsenal were of the US Model 1795 musket production circa 1809. In collector’s terms that meant that the Harpers Ferry sample arms were Model 1795 Type I muskets, and the Springfield sample arms were nominally of the 1795 Type II and/or Type III patterns. These different samples resulted in variations in the arms delivered by different contractors. In some cases, features that were typical of Harpers Ferry arms appeared on guns that were otherwise essentially Springfield pattern arms and vice versa. Thus, a dizzying array of minor variation appears in the 1808 contract arms. This is even more apparent on the contract arms delivered to the various states, as these guns were usually not subjected to the same level of inspection and gauging as those guns delivered to the Federal Government.

The Maryland Contract Musket offered here is formerly from the George Moller collection and is pictured in plate 144.J1N-A and described in Volume II of his books on pages 217-218. George hypothesizes that the gun was produced on contract for the state of Maryland immediately after the War of 1812. His assumption is based upon the low comb stock that is more akin to those seen on the “Standard Musket” of 1815 and the later 1816 pattern arms. It is worth noting that this stock profile appears on sample muskets at both national armories circa 1813. It is quite possible that the 1808 musket contractors like Nippes were in somewhat regular contact with the arsenals, trying to stay ahead of the curve on changes and improvements in the patterns of arms. As a pattern change at the national level could result in some of the parts or arms on hands with a contractor no longer being acceptable to be delivered, the old axiom “forewarned is forearmed” is worth considering. In Volume I of his two-volume work U.S. Military Flintlock Muskets, Peter Schmidt notes that the US Model 1808 contract muskets delivered by Nippes & Co were based upon the Harpers Ferry Type I 1795 pattern, and yet Moller notes that this gun is based upon the Springfield pattern for those arms. This suggests that either Nippes changed the pattern he based his work upon during the course of his work or that this is one of the Henckels produced guns that used a Nippes manufactured lock, as Henckels work was based upon a Springfield sample. One feature that does suggest that this gun may be from the 1815 period is that the barrel is slightly shorter than the typical 1808 contract guns. The 1808 guns had nominally 44 ½” barrels (+/-) and this musket’s barrel is 42” in length, more typical of the post-1815 production arms.

This gun has a minimal number of markings. The .69 caliber 42” round barrel has only a raised P proof in a depressed oval at the left breech and a single capital M mark in the same area. The “M” is indicative of ownership by the state of Maryland. The flat flint lock has a slightly beveled edge, a pronounced teat at the rear and measures nominally 6.5” in length. The lock has a rounded and fenced integral iron pan with a bridled fizzen that has a pronounced median ridge and no decorative faceting on the face. The toe of the frizzen is straight and the frizzen spring terminates with an arrow-shaped faceted tip. The flat reinforced cock has a beveled edge. The lock remains in original flint and all of the parts are all marked with the mating mark X, including the internal parts, screws and even the top jaw screw. The lockplate is marked with a {Spread-Winged Eagle}/US, with the “US” in an oval. The rear of the lock’s plate is marked in three vertical lines and reads:

The counterpane of the stock is marked with two small, deep W marks, which are likely inspection marks.

The barrel of the gun is secured with three flat, spring retained barrel bands, with the upper band double strapped. All three band springs are located to the rear of the bands and have small tabs that engage holes in the barrel bands. The rear strap of the upper band is mounted with a brass blade front sight. The triggerguard measures 9 ¼” long with rounded ends. A pair of bell-shaped wire loop sling swivels of the Harpers Ferry pattern are secured to a lug forward of the triggerguard and the middle barrel band. A button head ramrod is secured in the channel under the stock.

The musket remains in VERY FINE condition. The musket is 100% complete and correct with no apparent replacement parts or restoration. The markings remain in crisp and clear throughout and all are fully legible. As noted, the lock remains in original flint and all of the lock parts appear to be original to the gun. The touchhole is crisp and appears unmolested. The hole is slightly forward of center in the pan and appears to be slightly tapered and angled. The touchhole shows no signs of having been altered or modified. The lock is mechanically functional and works perfectly on all positions. The bore of the musket is in FINE condition and is mostly bright with scattered light surface oxidation and some scattered light pitting. The metal of the musket is mostly smooth throughout and has a medium pewter patina. The metal may have been lightly cleaned at some point in the past and shows some scattered surface oxidation and mottled discoloration along the length of the barrel and on the iron furniture. The metal also shows some lightly scattered minor dings and small impact marks, typical of any musket that saw service. There is also some very lightly scattered pinpricking here and there, with some light pitting on the lockplate itself and around the breech area of the barrel. The musket retains both original sling swivels and the period ramrod is full-length and retains fine threads at the end. The ramrod is very tight in the channel and requires substantial effort to remove. The stock of the musket remains in VERY FINE condition as well and is extremely crisp and sharp. The wood retains some of the feathery texture along the stock and has never been sanded. The wood retains very sharp edges and lines, with some scattered light handling marks and minor mars. The wood is so crisp that the most minor deficiencies are worth noting. There is a tiny surface chip missing at the rear of the breech plug tang and some minor surface chipping around the tail of the lock mortise. Otherwise, the stock remains in really exceptional condition considering that it is more than 200 years old.

Overall, this is a really exceptional example of Maryland State Contract Model 1808 Musket that was likely produced circa 1815. The gun is entirely complete and correct and remains in really wonderful condition. For any serious martial flintlock musket collector, this would be a wonderful addition to the collection, if nothing else due to its fantastic condition. The gun comes from a well-known and famous collection and is published in US Military Shoulder Arms-Volume II. This is a great, no excuses gun that you will be very proud to add to your collection and display and for a very fair price.