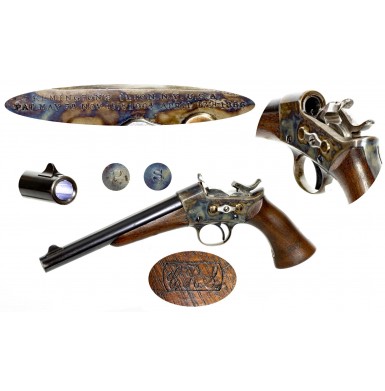 With this incredibly backward thinking as their primary motivation, on February 25, 1871, the US Ordnance Department agreed to acquire 5,000 Model 1871 “Army” Rolling Block Pistols from Remington, in exchange for 5,000 used Remington New Model Army percussion revolvers then in storage at various government facilities. The new M1871 pistols were valued at $11 each, and Remington gladly took the New Model Army revolvers in trade, altered them to cartridge and sold them on the civilian market. The Model 1871 Rolling Block Pistol was an improved version of the 1867 Navy model. While it retained the same 8” round barrel and .50-25 CF chambering, there were numerous improvements to the previous design. The grip was redesigned with ergonomic improvements and the addition of a spur or hump at the upper rear of the frame to help control recoil. There were also mechanical improvements to the lock work, the extractor, and the addition of a retracting firing pin. A new front sight blade was included in the redesign as well. The resulting pistol is certainly one of the most elegant and attractive handguns to see US military service, along with being one of the least practical. Like the earlier US Navy variants, the pistol had a blued barrel and a color case hardened frame. The hammer and breech lever were left in the white and many small parts has a yellowish “straw” color as a result of the heat-treatment process. A one-piece walnut grip and a walnut forend completed the pistol. Of the 5,000 pistols delivered by Remington to the US military, 1,377 were issued for field testing. However, as the US military adopted the Model 1873 Single Action Army slightly more than a year after contracting for the Rolling Block pistols, the reports from the field certainly found fault in the single shot design and commanders sought to replace the Remington with the new Colt revolver. The M1871 was soon withdrawn from service, despite the generally held belief in the upper echelons of command, that the single shot pistol was still the best firearm for cavalry, who were really supposed to rely on the saber as their primary weapon.

The left side of the receiver is also marked with the US military sub-inspectors’ initials P and S. The frame and receiver retain about 95%+ of their vivid case colored finish and are really very striking in appearance. The triggerguard itself has dulled and faded slightly and retains less vivid mottling. The gripstrap, which rarely retains any vivid color still retains much of the attractive mottled coloring. Even the back strap retains much of vivid case coloring along its entire length, with some freckled surface oxidation scattered along its length. The barrel retains about 95%+ of its original blued finish, showing some very minor dulling and fading from age. There is some extremely light wear and loss along the contact points and high edges, particularly around the muzzle, which appears to be holster wear. The hammer and pivoting block retain the large majority of their original arsenal bright polish. Both of the cross bolts in the frame retain about 80%+ of their original strawed finish, which shows some minor thinning and fading. The metal is all smooth with no pitting of any sort present, nor even any real pinpricking to speak of. Some extremely tiny and barely visible flecks of minor surface oxidation can be detected under strong light, scattered along the barrel, mixed with the original blued finish, as well as some more moderate freckling and oxidation at the muzzle and along the backstrap. The bore of the pistol is in EXCELLENT condition as well and is mirror bright and retains excellent rifling. There is only some very light pinpricking and some light frosting present along the length of the bore. The action of the pistol works perfectly and remains extremely crisp and tight with excellent mechanics. The one-piece walnut grip remains in about VERY FINEcondition. It retains an excellent and clear script inspectors’ cartouche that reads CRS, for armory sub-inspector Curtis R. Stickney. The forend remains in about VERY FINE condition as well. Both parts are free of any breaks, cracks or repairs and remain solid and complete. They do show some light wear and a small number of minor bumps, dings, and handling marks as would be expected, but are really extremely crisp and their condition matches the balance of the gun very well.

Overall, this is a really outstanding and extremely high condition example of a relatively scarce US Martial Pistol from the beginning of the cartridge age and then of the single-shot pistol era. This would be both a wonderful addition to your Indian War era martial arms collection and a great potential single-shot target pistol or game getter. The photos below really do not do justice to the condition and appearance of this pistol. This would be a wonderful addition to any advanced collection of US martial pistols and would certainly be almost impossible to upgrade.