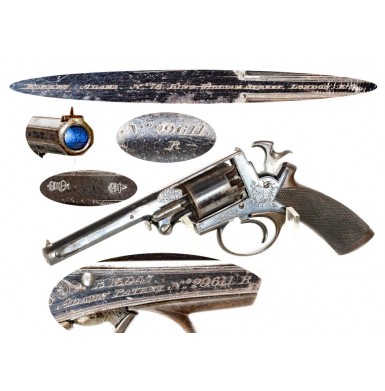 This is a very attractive example of the Beaumont-Adams Model 1854 double action revolver. These fine quality solid frame revolvers were as important to the history and development of the revolving handgun as were the developments and designs of Samuel Colt. Robert Adams received his patent for a solid frame, one-piece revolver design in 1851. The patent covered his design for a very strong revolver, where the frame and barrel were machined from a single forging. Adams additionally patented a self-cocking lockwork, which today would be referred to as “double action only”. This mechanism cocked the spurless hammer, rotated the cylinder and released the hammer, all as the result of a single pull of the trigger. While this allowed for rapid firing, the long, heavy trigger pull inhibited accurate firing. These designs were incorporated into Adams M1851 self-cocking revolver.

In 1854, Lt. Frederick Beaumont developed an improvement for Adams’ lockwork, which produced what would be called a traditional “double action” revolver today. The new lockwork allowed the revolver to operate in the fashion of Adams’ original design, but also added the facility to cock the revolver manually and fire it with a lighter “single action” trigger pull. This refinement allowed for more accurate shooting. In 1854, Adams also patented refinements to his original frame design by adding a sliding frame mounted safety on the right side of the revolver, and an improved cylinder arbor retaining mechanism as well. The resultant combination of design improvements were manufactured as the Model 1854 revolver, known to most as the Beaumont-Adams revolver. The revolvers were produced directly by Adams as part of his partnership with the London based Deane, Adams & Deane, as well under license by Birmingham makers like Joseph Brazier and Isaac Hollis & Sons. The revolver was also licensed for production in America by the Massachusetts Arms Company, as well as in Belgium and some of the German states. William Tranter also employed Adams solid frame in the production of his revolvers. Upon the dissolution of the Deane, Adams & Deane firm, Adams went to work for the London Armoury Company, and his revolvers were produced there as well from circa 1857-1859.

It is difficult to ascertain exactly how many Adams patent revolvers were imported for use during the American Civil War. At least 1,075 were purchased directly by the US government. It is known that some military outfitters like Schuyler, Hartley & Graham purchased quantities of these revolvers for private sale to officers and those volunteer groups who looked to their state and local governments, rather than the US government, to purchase arms. About 300 of the Schuyler, Hartley & Graham guns are reported to have been purchased by the state of Alabama prior to the war. Virginia and Georgia are reported to have made pre-war purchases of these revolvers as well. While the Confederate central government never directly contracted to purchase Adams patent revolvers (they concentrated on purchasing Kerr’s Patent revolvers from the London Armoury Company), Confederate speculators and individual states did purchase these fine English revolvers in some quantity. A number of Confederate identified and presented Adams revolvers exist in public and private collections, including #40,537 in the Museum of the Confederacy. This revolver is cased with an engraved presentation plaque from Robert Adams to Confederate General Stonewall Jackson. Two other Adams revolvers in the low 41,XXX range are attributed to Confederate naval use aboard the CSS Shenandoah. Most Confederate war time purchases are believed to have fallen within the 32,000 to 42,000 serial number range, although it is quite likely that guns produced prior to that range (and imported to America) were used, and in some cases old stock was sold to Confederate speculators, resulting in pistols that were several years old passing through the blockade. Civil War regiments that are known to have carried or been issued Adams Patentrevolvers include the 8th PA and 2nd MI cavalry on the US side and the 1st & 5th VA and 5th GA cavalry on the CS side. It is generally assumed that the majority of these guns were 54-bore (.442 caliber) Beaumont Adams M1854 pattern revolvers.

This Model 1854 Beaumont Adams Revolver is in about FINE condition. The gun is a 54 bore(.442 caliber) revolver with a 5-shot cylinder with the serial number 29,611.R. While it is difficult to date Adams revolvers from their serial numbers the way you can with Colt’s, it is safe to assume that this revolver was probably produced immediately prior to the American Civil War, likely circa 1859-1860. The M1854 frame improvements were not put into production until February of 1855, and London Armoury production started somewhere in the low 17,000 serial number range in late 1856 or early 1857. The R-suffix to the serial number indicates manufacture by Adams. The gun also has a B-prefix serial number which is 13,947, indicating it was the 13,947th Adams produced with the Beaumont lockwork. These numbers were applied to the revolvers from the beginning of Beaumont-Adams production through sometime in 1862 when the Beaumont licensing agreement expired. These “B-numbers” were patent royalty tracking numbers, in reference to Beaumont’s lockwork patent, and helped insure Beaumont was paid the appropriate patent royalties for the use of his design. The topstrap and barrel are crisply engraved:

The frame itself is also engrave with tight foliate scrolls with about 50% coverage. The flowing scrolls are present on the lower rear of the frame as well as at the frame to barrel junction, forward of the cylinder. Light engraving is also present on the bottom of the triggerguard and buttcap. The octagonal barrel is engraved with double boarder lines along its edges, and simple flowing loops are present at the muzzle and on the leading edge of the cylinder. This is a simplified version of the more deluxe engraving found on the Stonewall Jackson revolver at the American Civil War Museum (formerly the Museum of the Confederacy). That revolver has about 80% engraved coverage on the frame, with the majority of the cylinder engraved as well. This revolver does have the same style of barrel address found on the Jackson revolver. Later production Adams revolvers eliminate the name “Robert” in the marking and replace it with the initial “R”.

The obverse frame is engraved in two lines below the cylinder:

The cylinder bears the matching serial number No 29,611 over the letter R. The cylinder has the expected London commercial proof marks between the chambers and the barrel has a pair of London proofs on the upper left angled flat. The barrel is 5 5/8 inches in length and is rifled with three wide grooves, roughly twice the width of the lands. The bore rates about GOOD+ and is moderately oxidized with moderate pitting scattered along its length. As previously noted, the gun is in about FINE overall condition and retains much of its original bright blue finish. The barrel retains about 65%+ of the original bright polished blue, and the frame retains about 75%+ of its original finish. The cylinder retains about 60% of its original blued finish. Most of the areas where the finish has worn or faded have developed a mostly smooth plum-brown patina, with traces of gray and minor surface oxidation. The loss on the barrel is primarily along the sharp edges of the octagonal barrel and is likely the result of holster wear. The barrel and frame are mostly smooth and essentially free of any pitting, with only some very small, scattered patches of lightly oxidized surface roughness and pinpricking present, most notably along the edges where the finish is worn. There is some light pitting along the edges of the topstrap, as well as on the interior of the frame, mostly around forward part of the cylinder. There are also some scattered minor surface scratches and impact marks present here and there on the revolver; all the result of handling and use during the revolver’s service life. The cylinder shows light to moderate pinpricking scattered some of its surfaces, with light pitting and oxidation present in the percussion cone (nipple) recesses. All of the original cones are all present and in very good condition. The gun retains its original Kerr’s patent loading lever. The lever is unmarked and retains about 50%+ of its original blued finish as well. The lever is fully functional, operating smoothly and locking securely into place when not in use. The action of the revolver works perfectly in both single and double action modes and is mechanically excellent. The hammer is finished in the white and still retains some of its original bright steel finish, with some discoloration and scattered surface oxidation. The iron trigger guard and butt cap both retain none of their original blue and show a smooth, brown patina. The original M1854 patent sliding safety is present on the right side of the frame and functions exactly as it should. The original M1854 cylinder arbor retaining wing nut is in place on the right side of the frame and functions correctly as well. This delicate piece is often broken or missing, so it is nice to find it in complete, functional condition. The checkered one-piece walnut grip is in FINE condition as well, showing only the usual expected light wear, with some very minor flattening to the tips of the checkering. The grip also shows some very light scattered handling dings and mars. The grip is solid with no chips, cracks or repairs noted. Overall, the condition of the revolver is indicative of a gun that was carried and used but was never abused during its service life and was always well cared for.

Overall this is a very nice looking example of an engraved Beaumont-Adams patent revolver in a very nice state of preservation. These guns were as important to the development of revolvers in England and on the European continent as the Colt revolvers were in America and were some of the first truly successful double action style service revolvers to be produced in large quantities. These guns saw service on both sides during the American Civil War, and a Beaumont-Adams revolver is a must have in any Civil War revolver collection. This gun is in fine mechanical condition, retains a lot of finish and is very well marked. It is bargain priced, when you consider that an engraved Colt M1851 Navy in this condition would probably cost more than $7,500!