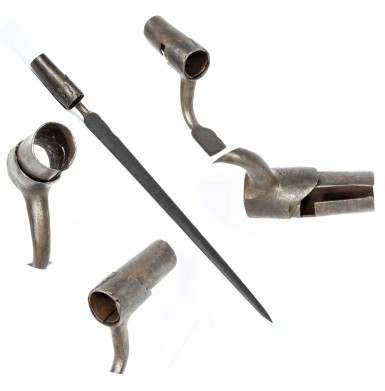 This is a very interesting and crude example of a Colonial Period American Applied Socket Bayonet. It is not completely clear if the bayonet was made this way from scratch or was the repurposing of a bayonet that already existed and was damaged and repaired to be useful or was altered for use on a different pattern of musket. The blade has the general appearance of a mid-18thcentury French bayonet, so it is quite possible that the bayonet was re-purposed by a Colonial blacksmith, or that the bayonet had been damaged and was subsequently repaired in a somewhat crude manner.

The bayonet measures about 17 ½” in overall length with a 14 ¼” long blade with a 12 5/8” flat section on the face with a 6 7/8” rudimentary fuller and a width of .82” at the widest point. The bayonet attaches to the socket via a 1 ½” long, thin, curved shank. The socket measures 2 13/16” long with a nominal muzzle diameter of about .85”. The socket is slightly out of round, so the measurements vary between .85” and .92”. This nominal diameter suggests the bayonet was intended for a musket that was nominally about .70 to .72 caliber, but probably not as large a bore as the .75 caliber Brown Bess. The socket is cut with a two-step mortise and is cut for a top stud. The first step measures 1 ¼” in length and the second step is ½”. The width of the mortise cut varies from .225” to .3” to .33”. It appears that this split socket was applied to the remnants of the original socket that had been cut away and this made the bayonet useful again.

Crudely manufactured and assembled socket bayonets like this are typical of the some of the locally produced bayonets that saw use in America during the colonial and Revolutionary War period, but these bayonets are rarely encountered and rarely seen for sale. This example remains in about GOOD condition, with the overall appearance of being an early battlefield pickup or possibly a barn found relic. The metal appears to have been cleaned chemically, leaving a dull brownish gray patina with scattered patches of surface oxidation and additional discoloration. The metal shows some scattered pitting, as well as some chipped loss along the edges of the blade. This is most noticeable on the left side of the blade near the shank. The unbridged, split socket has been squeezed at the rear to make it fit a musket more securely, a typical method of tightening bayonets in the period of friction fit sockets without a locking ring.

I rarely get the opportunity to offer Colonial Era socket bayonets for sale. While this one is in fairly rough condition, it is a very interesting piece worthy of additional study that would be a wonderful addition to any socket bayonet collection or any collection of Colonial period arms from the French & Indian War or the American Revolution.