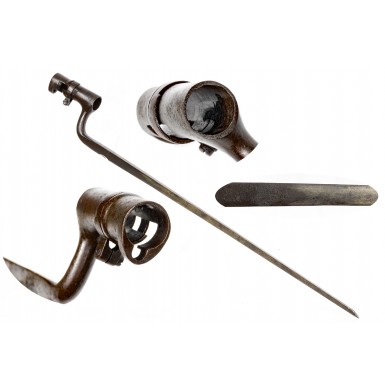 In November of 1862 correspondence appears with the Confederate Ordnance Department regarding the production of a new pattern of socket bayonet that was referred to as the “3-Square”. This new bayonet was to be made at the Richmond Arsenal and had a three-sided triangular blade with all sides flat, without any flute in the face or fluting along the two angled sides. From a construction standpoint the bayonet was to be made primarily of wrought iron with a “steel tip”, a measure which would conserve the precious steel for more important uses like rifle musket barrels. The use of both iron and steel in the construction of bayonets had been common during the 18th and early 19th century and the British had continued that process through the Civil War period as their Pattern 1853 Enfield Socket Bayonet had an iron socket and shank and a steel blade. The Confederate system, however, use the iron not only for the socket and shank but for a portion of the blade, with only the last part of the blade made of steel. The lack of machined flutes in the blade provided two advantages to the south. First, it theoretically allowed the iron blade to be as strong as a steel blade and secondly it reduced the machining and manufacturing steps to make a bayonet. This saved time and skilled labor for other projects.

The bayonets were produced in two styles. The first one had a US Model 1855 type socket which was intended for use on both US rifle muskets of the 1855 and 1861 pattern as well as British Pattern 1853 Enfields. The second type had a US Model 1835 socket for use on Model 1842 Muskets as well as earlier Model 1835/40 Muskets, most of which were likely altered to percussion. The 1855 style was made with a slightly oversized socket that measured nominally .79” rather than .78” at the muzzle, to more easily allow it to work on both Springfield and Enfield pattern arms. The Confederacy had no illusions that these “3-Square” bayonets were of the same quality as those made entirely of steel and continued to produce an entirely steel version of the US 1855 bayonet with a fluted face for much of the war. To this end, correspondence indicates that the Ordnance Department intended the 3-Square bayonets to be issued with gun that had been repaired at the Richmond Arsenal and reserved entirely all steel bayonets for use with the newly made guns coming out of the arsenal. As the war continued and the availability of raw materials for use in arms production continued to wane, the Richmond Arsenal system began to increase the production of the 3-Square bayonet and decrease the production of the steel 1855 copy. Additional correspondence indicates that when the Fayetteville Arsenal was transitioning from the manufacture of the brass hilted saber bayonets for their rifles to socket bayonets, they asked Richmond if they should produce an entirely steel bayonet, which they were capable of doing without further guidance or if they should produce an iron bayonet with steel tip. If Richmond wanted Fayetteville to produce the latter the North Carolina arsenal requested a sample be sent to them to copy.

While the Richmond 3-Square Bayonet has traditionally been thought of as strictly an arsenal produced item, other correspondence indicates that raw materials were being provided by the arsenal to contractors who were producing 3-Square bayonets. It is not clear if the contractors were providing finished bayonets or simply rough forged bayonets that were then ground and polished at the arsenal. As a result determining the exact production totals for the these bayonets is somewhat problematic particularly with the somewhat fragmentary records available.

The .58 caliber variant of the 3-Square bayonet has a very distinct profile with a typical 1855 style socket that was nominally 3” in length, with a nominally .79” muzzle diameter and a 1 3/16” muzzle to stud distance. The bayonet had a fairly narrow, curved shank that was about 1 ¼” in length and the immediately identifiable flat sided triangular blade that was nominally 18” in length. The blade was quite narrow compare to an 1855 pattern blade and was nominally 19/32” wide at the widest point and about 9/16” thick at the thickest point. The hammer welded joint between the iron rear portion of the bayonet and the steel forward portion of the bayonet varied to some degree. This could indicate the differences in contractor produced bayonets from arsenal produced ones, or could be an indication of when the bayonet was made with less steel being used in the later war bayonets. The overall workmanship of the bayonets is certainly sub-par by US arsenal standard and the wrought iron sockets are often found bored somewhat off center, with flaws in the iron components relatively common. Even the hole for the tension screw of the locking ring is often drilled off center.

The example of the Richmond 3-Square .58 Caliber Socket Bayonet offered here is in ATTIC FINE condition and is completely untouched. The bayonet has a thick, heavily oxidized dark brown patina and has not been cleaned. The oxidation is darkest and thickest on the iron portion of the bayonet with the steel portion of the blade having a lighter brownish-gray color. The transition between the iron and the steel is about one quarter of the way from the socket to the tip, at roughly 4 ½” from the neck, with about 13 ½” of the blade made of steel. The socket measures 3” with a .795” muzzle diameter that is bored off center with the socket walls varying from slightly over .04” in thickness at the thinnest part to about .07” at the thickest area. The interior of the socket shows a major casting flaw near the neck junction and a lesser flaw is visible on the exterior of the socket, on the right side when the bayonet is mounted, forward of the locking ring. The original locking ring is in place and is slightly loose, with its screw hole bored very close to center, but still visibly off slightly towards the rear. The locking ring moves smoothly and works as it should. The blade measures 18” and the bayonet is full-length and complete without any damage. The tip of the bayonet remains extremely sharp. The metal is heavily oxidized as noted but is actually free of any real pitting. There is scattered minor surface roughness on the iron portions, particularly the socket but overall, the metal is mostly smooth and in very nice condition.

Overall, this is a really nice, completely untouched, and complete example of a scarce Richmond 3-Square .58 Caliber Socket Bayonet. These do not appear on the market very often and are highly prized by collectors of Confederate arms. This would be a wonderful addition to your Richmond Arsenal C&R (Cleaned & Repaired) .58 caliber rifle musket. For the Civil War bayonet collector, this is an uncommon opportunity to obtain a scarce Confederate made socket bayonet in crisp, untouched condition.