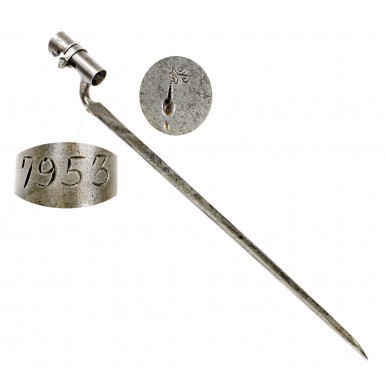 During the course of the American Civil War, the Confederacy imported hundreds of thousands of British Pattern 1853 Enfield Rifle Muskets, with some estimates placing the total Confederate purchases between 300,000 and 400,000 guns. Each of these rifle muskets was ordered as a “stand of arms” and as such a socket bayonet was included with each musket. This makes the Pattern 1853 Enfield socket bayonet one of the most commonly used bayonets by the average Confederate infantryman. Much like the guns themselves, it is often difficult to know for sure if a given British “Enfield” socket bayonet was used during the American Civil War, let alone whether it saw US or CS use. While it is generally accepted and known that British military marks on either a gun or bayonet usually exempts that item from possible Civil War service, the lack of these markings in no way guarantees use during the conflict. Only a small percentage of Pattern 1853 Enfield rifle muskets were marked in any way that identifies them as being Confederate purchases, based upon my observations and known contract markings, probably less than 30%. The best known of these Confederate guns are the ones marked with the JS / {ANCHOR} inspection stamp of John Southgate, as well as with an engraved inventory number on the upper tang of the brass butt plate, or a number stamped in the toe of the stock of the iron mounted rifles. The rifle muskets that were so numbered were shipped with a matching numbered ramrod, and a similarly engraved numbered socket bayonet. The rifles also had numbered ramrods, and mounted engraved number saber bayonets. A group of the most knowledgeable researchers into Confederate arms imported from England have been assembling a database of Confederate numbered rifles and rifle muskets for over 25 years. During that time, they have assembled a database of slightly more than 300 Confederate central government purchased numbered P1853 Enfields (not counting the numbered state purchased guns). During that same time, they have assembled a list of less than 70 Confederate numbered socket bayonets! That means that Confederate marked English socket bayonets are more than four times less common than the numbered Confederate long arms! Moreover, many of these numbered bayonets are in institutional collections, meaning they will not likely to ever be available to the collector market.

The Confederate imported P1853 Enfield Socket Bayonet offered here is engraved on the top rear of the socket with the Confederate inventory number 7953 on the socket. This number places it within the first of three groups of 10,000 numbered arms that were delivered to the Confederacy under the 2nd Sinclair, Hamilton & Company contract. The initial group was numbered from 1-9999, and the two subsequent groups were numbered in the same range, with the suffix “A” added to the second 10,000 and “B” added to the third 10,000. It is likely that this bayonet (and its accompanying rifle musket) were part of the initial deliveries of arms to the Confederacy during late 1861 or the first few months of 1862. This means that this bayonet was more than likely in use by Confederacy in time to see service at the battle of Shiloh in the Western Theater, or the Peninsula Campaign in the Eastern Theater.

The bayonet is in about GOOD overall condition and is about in the middle of condition range of the surviving Confederate numbered socket bayonets. As noted previously, the engraved Confederate inventory number 7953 is present at the upper rear of the socket, perpendicular to the blade. According to our data base, the Confederate central government Pattern 1853 Enfields that are known to survive today that are closest to this bayonet number are #7905, #7977, #7984 and #7986. According to our notes these are all Birmingham contractor delivered guns, with the two lowest numbers being guns produced by CW James and with no maker or furnisher markings noted on the two higher numbers. No state contract guns were numbered this high, so the bayonet was clearly delivered with a Central Government contract P1853 rifle musket. The ricasso of the bayonet is marked with a small “tad pole” like touch mark as well as the remnants of a flowing mark that might have been the “Prince of Wales Feathers” mark, which is sometimes found on the work of various English arms makers.

The blade of the bayonet has medium pewter patina with a salt and pepper appearance, the result of an evenly distributed oxidized patina over most of the blade. The bayonet appears to have been cleaned long ago and is now toning down. The blade shows an obvious flaw in the diagonal hammer weld that joins the steel blade to the iron shank and socket of the bayonet. While these weld lines are sometimes identifiable by differences in the color between the steel and iron, they are not usually this obvious. The metal shows some scattered moderate pinpricking with patches of light pitting as well. As is typical, the blade, shank and socket all show some scattered bumps, dings and impact marks. The socket retains no finish and has the same dull, cleaned pewter patina as the blade. The socket has been reamed out at some point in time to allow it to fit larger, .69 caliber barrels. It actually slips right on a US M1816 musket as if it were made for it. It now measures a nominal .830” instead of the typical .785”-795” bore diameter of an unaltered socket bayonet. It is impossible to know when the socket was modified for use on other muskets than the P1853, but it seems unlikely that such a scarce and valuable bayonet would be so modified in modern times. It is well known that the Confederacy was always short of small arms, bayonets in particular. It is not unrealistic to believe that the socket may have been modified during the war to fit another musket. Thankfully the modification is not visible and does not affect the display of the bayonet. The enlarging of the socket just means that it will be loose on your Enfield but will almost certainly fit because the socket has been enlarged.

The bayonet is complete with a full-length blade, measuring 17 7/8” and the bayonet has an overall length of about 20 ¾”. The tip of the blade remains extremely crisp and sharp. As noted, the bayonet does show some scattered nicks and dings, mostly along the spine on the rear of the blade, as well as a few minor dings along the blade edge. The bayonet has clearly seen use during its service life, and the relatively early inventory number confirms it was a bayonet that likely saw field use during the majority of the war. The original locking ring and tension screw are in place on the socket and remain fully functional.