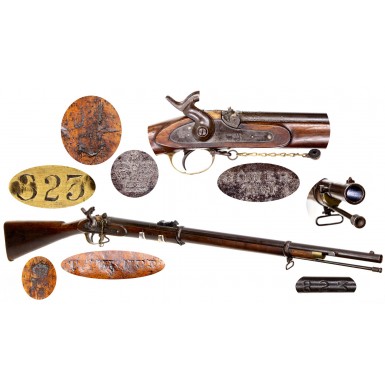 This is a well-used but authentic example of the rarely encountered Confederate imported British Pattern 1858 Naval Rifle. During the early days of the American Civil War, the Confederacy exerted Herculean efforts to obtain high quality weapons for its military. Confederate purchasing agents in England concentrated on obtaining all available “Enfield” pattern arms that could be acquired. While the purchases concentrated on Pattern 1853 “long” Enfield rifle muskets for use by the infantry, a number of “short rifles” and carbines, both of the “artillery” and “cavalry” patterns were obtained as well. Confederate documents reveal that these early orders included 30,000 Pattern 1853 “Long Enfields” (obtained from Sinclair, Hamilton & Company), as well as approximately 10,000 “Short Rifles” of varying patterns. These guns are the ones that appear with the JS / {ANCHOR} viewer’s mark of John Southgate and engraved (or stamped in the case of iron mounted rifles) Confederate inventory number markings. The “Long Enfields” were inventory numbered in three series, from 1-10,000, 1-10,000 with an “A” suffix and 1-10,000 with a “B” suffix. The short rifles purchased for the infantry were simply serialized 1-10,000, without series letters. The short rifles were mostly a mixture of standard Pattern 1856 and Pattern 1856 Type II (Bar on Band) iron mounted rifles, as well as brass mounted commercial versions of both of those rifles as well. In addition to the more commonly acquires guns there were a handful of Pattern 1860 and Pattern 1861 rifles and also a small number of the brass mounted Pattern 1858 Naval Rifles.

The Pattern 1858 Naval Rifle was in many respects similar to the standard Pattern 1856 rifle, but with a few minor cosmetic differences and one major performance difference. The P1858 was a brass mounted rifle, instead of iron mounted, and had the rear sling swivel attached to the front bow of the triggerguard, rather than being screwed into the toe of the stock. The P1858 retained the 1,100-yard rear sight and 33” barrel of the P1856 rifles, but the barrel was much heavier and was rifled with 5 grooves instead of the 3 used on the P1856 rifles.  The heavier barrel and improved rifling pattern made the P1858 rifles more accurate than the P1856. The heavier barrel also dissipated heat more effectively, resulting in less change to the point of aim / point of impact after repeated firings. This barrel and rifling pattern were so successful that the British military adopted the heavier, 5-groove barrel for use on later production  Pattern 1860 Short Rifle in 1860, superseding the earlier Pattern 1856 rifles.

The Pattern 1858 Naval Rifle was also designed to accept a cutlass bayonet, designated as the Pattern 1859, instead of the standard saber bayonet. Acquisitions by Confederate purchasing agent Caleb Huse for the Pattern 1858 Naval Rifle for use by the Confederate Army appear to be limited to about 700 guns. These can be pinned down to two specific orders: one for 200 on June 11, 1861 and one for 500 on June 27, 1861. Huse’s order to Sinclair, Hamilton & Co specified “Sea Service Rifles, New Pattern, same bayonet as short rifles.”. This clearly indicates that Huse did not want to purchase the cutlass bayonets that the Naval Rifle was intended to accept. However, in late July or early August 1861, Commander James Bulloch, the overseas purchasing agent for the Confederate Navy, placed an additional order for 1,000 Pattern 1858 Naval Rifles, complete with the cutlass bayonets. These guns were also marked with the JS / {Anchor} inspection stamp in the belly of the stock and had inventory numbers from 1-1000 engraved on their brass buttplate tangs and on their ramrods. The accompanying Pattern 1859 Cutlass Bayonets were also marked with an engraved inventory number that matched the rifle they were fit to. Bulloch noted this purchase in a letter to the Confederate Secretary of the Navy S. R. Mallory, dated August 13, 1861. In Bulloch’s post-war memoir The Secret Service of the Confederate States in Europehe noted: “1,000 Short Rifles with Cutlass Bayonets and 1,000 rounds of ammunition per rifle were shipped aboard FINGAL that arrived 14 November 1861”. The cargo of the FINGAL was delivered to the port of Savannah, GA. In addition to the rifles for the Confederate Navy, FINGAL delivered the first 1,100 “Long Enfields” obtained by the state of Georgia, which were marked with a “G” on the obverse buttstock, and Enfields for the Confederate central government as well. Today there are roughly 50 of the engraved, Confederate numbered cutlass bayonets known to exist, with the highest number known being 999. It is more difficult to know for sure how many of the of the Confederate Naval Rifles have survived, as the first 1,000 Central government purchased “army” short rifles and the Navy purchased rifles were numbered with duplicate numbers from 1-1000. A study of known surviving examples reveals that roughly 20 Pattern 1858 Enfield “Short Rifles” with serial numbers between 1-1000 are known to exist today. It is possible that all of these were part of the Bulloch naval rifle purchase, but it is equally possible that at least some of these guns may have been part of Huse’s short rifle purchases for the army. Only a very few examples of P1858 Naval Rifles can be 100% concretely identified as being Confederate Naval purchased arms. This is possible to determine because another known Enfield short rifle that is not a P1858 Naval Rifle exists with the same inventory number, proving the Pattern 1858 Naval Rifle is one of the “naval” purchased rifle. It is, however, fairly reasonable to assume that the majority of known examples are in fact Confederate Naval purchases. In either case, whether a CS Naval purchase (only 1,000) or a CS army purchase (about 700), these brass mounted, engraved inventory number rifles are extremely rare.

The Confederate purchased Pattern 1858 Naval Rifle offered here is fresh to the market and well-used as would be expected of any Confederate long arm that was delivered to the south prior to the end of 1861. The gun is engraved with the inventory number 823 on both the brass buttplate tang and on the shank of the ramrod. Form nearly three decades a group of researchers and collectors has been maintaining a database of surviving Confederate Enfield inventory numbers. In that list is an iron-mounted Pattern 1856 Enfield Short Rifle that is also number 823. This proves definitively that the gun offered here is one of the 1,000 Naval Rifles purchased by Commander Bulloch and delivered to Savannah in November of 1861 aboard the Fingal. Rarely can a Confederate imported Enfield be tied to such a specific purchase, the ship that it was on when it ran the blockage and the specific date and location of its delivery. This makes the gun a very historically important example, particularly when the extremely low survival rate is considered.

Overall, this is a solid and very scarce example of a real Confederate Naval contract Pattern 1858 Naval Rifle. With only about 20 CS numbered Pattern 1858 Naval Rifles known with numbers under 1,000, these are very scarce examples indeed. That fact that this gun retains its original matching numbered ramrod is almost unbelievable for a gun that saw four solid years of war. This gun can be directly tied to a specific contract, a specific blockade runner and a specific port of entry on a specific date. Rarely can that much specific information be directly attached to Civil War used long arm. The only detraction at all is the replacement rear sight and adding an original rear sight to the gun would make it 100% period and correct. This is a great Confederate gun that saw heavy use and has a really wonderful, untouched look. Rarely to real Confederate Naval Rifles appear on the market for sale, and this is a solid and very attractive example that you will be proud to own and display.