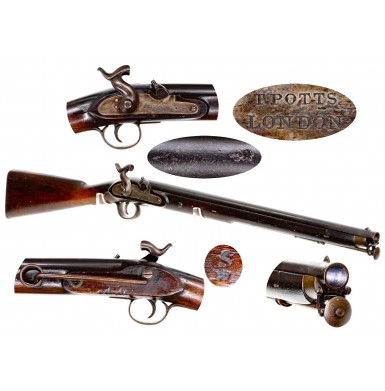 In 1808 the British military adopted a new cavalry carbine pattern in an attempt to address the complaints regarding the length and weight of the various pattern carbines then in service. It is worth noting that from the mid-18th century until the adoption of the newly designated Pattern 1808 Paget Carbine, there were a large variety of long arms in mounted service, ranging from true “carbines” to short muskets and rifles. Much of the decision regarding how to arm any particular cavalry regiment was left to the colonel commanding it, and his personal whim took precedence over uniformity of pattern or even caliber. During this period British military arms were generally grouped by bore size that referenced the primary weapon of that caliber. Hence “Musket Bore” was nominally .75 caliber (+/-) as with the Brown Bess, “Carbine Bore” was nominally about .67 caliber (+/-), as with Pattern 1756 Light Dragoon Carbine, the 1770 Heavy Dragoon Carbine and the Eliott Carbine, and “Pistol Bore” was nominally .58 caliber (+/-). However, some carbine patterns like the 1796 Heavy Dragoon Carbine were in the larger “musket bore” and some pistols were produced in the larger “carbine bore” to allow the use of the same projectiles (and sometimes cartridges) in both the carbine and the pistol. The Padget was the first attempt to create a somewhat standardized carbine and to also reduce its overall length and weight to make it a handier weapon for mounted soldiers. The resulting design was almost universally loathed, was generally considered worthless and in the infinite wisdom of the Board of Ordnance would remain in service at some level for several decades.

As adopted in 1808, the Paget Carbine was a flintlock smoothbore, muzzleloading carbine of “carbine bore” and nominally .66 caliber with a bolted lock and flat, reinforced cock. The carbine was 31” in overall length with a nominally 16” barrel that was secured to the stock via two wedges and a screw through the breech plug tang. A captive swivel ramrod was used for loading and was secured by a single trumpet shaped brass pipe. The gun also features a long sling bar and ring on the reverse, with the bar secured by the lock mounting screws. No sideplate was utilized and the limited furniture, consisting of the buttplate, triggerguard, nose cap and rammer pipe were of brass. The short barrel provided limited range and indifferent accuracy and while the gun was significantly shorter, lighter and handier than most of the preceding designs, its overall lack of utility resulted in few accolades from the troopers that carried it.

Despite the poor reception, the Paget remained the standard cavalry carbine through the remainder of the Napoleonic Wars and replacements did not start to appear until the adoption of the Pattern 1833 (aka “Manton Carbine”), which saw only limited production and issue. It was not until the adoption of the new percussion ignition Pattern of 1836 Victoria Carbine that the Pattern 1808 Paget Carbines started to be replaced in large numbers. Even then, some of the earlier flintlock guns were subsequently altered to percussion to extend their service life.

In 1847 a percussion version of the Paget was officially adopted, but primarily as a secondary weapon, and would see service primarily with the English Yeomanry (militia) cavalry and in the British colonies, in the hands of the East India Company or various local colonial militias. The primary reason for adopting the percussion version of an otherwise unpopular design can be explained as a function of expediency. The British Board of Ordnance system relied heavily on contractors who produced gun parts that were then assembled into complete arms at the Tower of London or by other contractors or “setter ups”. This meant that large numbers of unused component parts were readily available for assembly into complete arms. Additionally, the nature of the British arms industry, particularly in Birmingham, was that of a cottage industry. In this system, various artisans specialized in the making of locks, or barrels or “small work” (screws, rammers, etc.), stocks or brass furniture. As they were already capable of producing the Paget pattern parts, it was easier for many of these makers to keep doing so then to adapt to the production of a new pattern of part. To further extend the service life of this unpopular carbine, starting in 1852, the guns began to be delivered as rifled arms with three-groove rifling and a .685” bore. Older percussion guns were also upgraded by rifling. The end result was that the percussion Paget carbine remained in use with the English Yeomanry Cavalry through the mid-1860s and in some colonial situations the guns likely remained in service well into the early part of the metallic cartridge era.

Offered here is an EXCELLENT condition example of a Commercially Made Percussion Paget Style Cavalry Carbine by Thomas Potts. The gun conforms to the basic Paget design profile, , with the notable exception a longer barrel and stock and the use of a sling bar, which is also longer and not recurved, thus being secured by the rear lock mounting screw and second dedicated screw through the stock, forward of the lock mortise. The gun also tries to obviate the biggest complaint about the Padget by lengthening the barrel from 16” to 21”, theoretically increasing the range and accuracy. Overall, the gun measures 36”, rather than the standard Paget 31”. In many ways it can be considered a Paget style carbine with a barrel length and overall length that is closer to the later Pattern 1853 “Enfield” pattern cavalry carbine. The gun remains smoothbore, like the 1808 and 1847 versions and is nominally .66 caliber. The furniture, hardware and operation are exactly like the Pattern 1847 Paget, with the noted difference of the sling bar’s shape and method of securing it. One other interesting feature that belies its commercial production and hints at the potential destination of the gun, is the use of a spanner nut to secure the hammer to the tumbler, rather than a standard screw. The double slotted “bun nut” was typically used on arms destined for use by the Native Troops or police of the East India Company, later the East Indian Government. This required a special tool in order to remove the nut and the hammer, reducing the potential for unauthorized disassembly of the gun.

The gun was produced by the long time London gunmaking company of Thomas Potts and is clearly marked on the lock T POTTS, forward of the hammer. The firm could trace its gunmaking history to 1792 when patriarch of the family was apprenticed to London gunmaker Martin Brander. Potts was “free of the Gunmakers Company” in 1801 and “Took Livery” in 1807. He was elected Assistant in 1816 and Master in 1819, resigning the position in 1833. He operated his business in London at 70 Minories from 1828-1839 and added a second location in Goodman’s Yard in 1836, which he maintained through 1838. This was likely a retail location. He relocated to Haydon Square (Minories) in 1840, with the business remaining in that location through 1847 under the name of the senior Potts. Thomas Sr. died in 1842 and his son Thomas Henry Potts took over the business in Haydon Square in 1848, with his mother having managed the shop and production during the interim. Thomas Henry had been apprenticed to one of the most successful and storied of the London gunmakers, John Edward Barnett. In 1853 Thomas Henry relocated the firm to 32-3 Leman Street and 27 Tenter Square and went into partnership with Thomas Hunt, forming the well-known London firm of Potts & Hunt. The following year, Thomas Henry emigrated to New Zealand. The firm of Potts & Hunt remained in business through 1874.  During their working lives the two generations of Potts’ worked as contractors to the British Board of Ordnance (1835-1842), the East India Company (1827-1842) and of course produced arms for commercial sale. The large number of London gunsmiths of the period that are listed as having served as apprentices to Thomas Potts suggests that the scope of his manufacturing was quite large. (Blackmore). Other than the lock markings, the only other clearly obvious exterior markings on the carbine are a set of London commercial proof marks at the breech and the small block letter initials RJ at the rear of the counterpane. These are likely the initials of the “setter up” who was the man who actually assembled the gun. The sling ring is stamped T&CG for Thomas & Charles Gilbert, a Birmingham “small work” firm that specialized in making gun hardware like barrel bands, screws, ramrods, etc. The Gilberts operated from 1842-1862 at 56 Staniforth Street (Bailey & Nie).

As noted, the gun remains in EXCELLENT condition and remains extremely crisp, retaining most of its original finish. The barrel retains about 93%+ of its original deep, dark rust-blued finish and shows only some light thinning and fading, primarily along the high edges and contact points. The barrel is almost completely smooth with only some scattered minor roughness that appears to be more the result of old, dried remnants of oil or Cosmoline preservative than from oxidation. There are evenly distributed flecks and specks of surface oxidation over the entire barrel, but some of this may be old, dried oil as well and might well clean off with some mineral spirits or denatured alcohol. The color case hardened lock and hammer retain some traces of vivid case color, primarily in the protected areas of the lock plate. The balance has faded and dulled to a mottled tobacco brown and gray patina that shows some scattered freckles of surface oxidation. The lock remains mechanically excellent and functions crisply on all positions. The bore of the carbine remains in VERY FINE condition and is mostly bright and quite smooth, with some scattered patches of lightly oxidized discoloration and an area of more moderate oxidation in the last two to three inches nearest the muzzle. The gun retains its original swivel ramrod which remains fully functional and operates smoothy. The original front sight remains in place on the top of the barrel, near the muzzle as well. This variant was not produced with a rear sight, which is not uncommon for smoothbore carbines. The brass furniture has an attractive and uncleaned, deep ocher patina that looks wonderful. The stock of the carbine remains in about EXCELLENT condition as well. The stock is full-length, solid and free of any breaks, cracks or repairs. It is extremely crisp and retains fine lines and edges. The grain remains open with some of the original feathery texture still present. The wood has been discolored somewhat by the old coat of protective oil and some traces of the oil are still present on the wood as well as the metal. The only condition issue worth noting is a series of dings along the lower edge of the counterpane where the sling ring has impacted the wood. Otherwise only a small number of minor bumps, dings and handling marks are present.

Overall, this is an extremely crisp and high condition example of a Commercially Produced Percussion Paget Style Carbine by Thomas Potts of London. The gun is very attractive and is 100% original and correct in all respects. This would be a fine addition to any collection of mid-19th century English percussion arms, particularly for a collection that focuses on weapons that were likely made for or saw use in the British colonies during the middle of the 19th century. This is a really attractive gun that you will be no doubt proud to add to your collection and display.