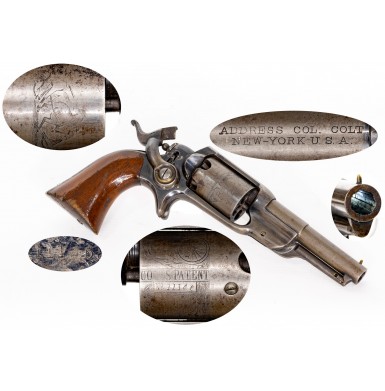 In 1855 the Colt Patent Firearms Company introduced a new series of “sidehammer” single action percussion pocket revolvers. Today, the guns are better known by their collector nickname, Root Revolvers. The nickname was a tip of the hat to Colt foreman and firearms designer Elisha K. Root, who many believed was the inventor of the “sidehammer”family of firearms. However, it was Sam Colt himself who developed the 1855 series of guns. The Model 1855 or “Sidehammer” family of firearms represented a number of firsts for the Colt Company in terms of design features, and many of features are found only on Model 1855 guns.

The two most obvious features are the solid frame with a topstrap and the side-mounted hammer. The solid frame would not be applied to a Colt firearm model again until 1873, when it would appear on the Model P, better known as the Single Action Army. This is unfortunate, as the solid frame design was much stronger than the usual Colt open top designs and would be a major factor in the US Ordnance Department’s eventual preference for the Remington New Model Army and Navy revolvers over the comparable Colt designs during the latter part of the American Civil War. The sidehammer feature would not appear on any other series of Colt firearms. The M1855 series was the only series of Colt firearms where the same basic design and mechanism was applied to both a line of handguns and long guns, as the Colt M1855 carbine, rifles and shotguns were simply much larger versions of the same mechanism; very much as the Paterson longarms had been quite similar to the handguns in that family of guns. The M1855 series marked the first, and only time that Colt would use a cylinder arbor pin that entered from the rear of the gun. This design often led to the pin being frozen in the cylinder and causing mechanical issues. It also made the removal of the pin quite difficult, and the large majority of Colt Side Hammer guns found today show impact or pry marks on the rear of the cylinder pin and on the frame around it in testimony to the frustration many users found in removing the pin from the gun. The Sidehammer revolvers were also the first Colts to utilize a sheathed “spur” trigger without a triggerguard. The M1855 series was the first time that Colt used barrels that screwed into the frame of the revolver, another feature that would not appear in the Colt product line again until the introduction of their Single Action Army. The one feature that was introduced with sidehammer line that would be seen repeatedly on other Colt percussion revolvers was the introduction of the “creeping” style, ratcheting loading lever. This was considered such a big improvement over the toggle style loading lever of the Model 1849 Pocket Model and the Model 1851 Navy Model, that it would become standard with the introduction of the Model 1860 Army Model and remain in use with all subsequent percussion Colt handgun designs, with the exception of the Colt Pocket Model of Navy Caliber (aka Model 1862 Pocket Navy).

The Colt Model 1855 Sidehammer Pocket Revolver was produced in two series, based upon their caliber, between 1855 and 1873, with a total of about 40,000 being produced. The first series was called .28 caliber, although the actual bore dimensions were nominally .265” and only the cylinder chamber mouths approached .28”. Some 26,000 of the 1st series were produced between 1855 and 1861, in four variants, known as the Model 1, Model 1A, Model 2 and Model 3 by collectors. The guns were all 5-shot percussion revolvers with octagon barrels that varied in length between 3 7/16” (Models 1 & 1A) and 3 ½” (Models 2 & 3). All had round cylinders (with the exception of a few very late Model 3s that were fluted), that were roll engraved with a W.L. Ormsby engraved scene of Indians attacking a cabin. In 1860 Colt introduced a .31 caliber version of the “Root”, and that gun remained in production through 1873, with some 14,000 revolvers being manufactured in six different collector designated types, the Model 3A, Model 4, Model 5, Model 5A and Model 6 & 6A. These guns remained 5-shot percussion revolvers but were made with 3 ½” octagonal barrels (Models 3A & 4), 3 ½” round barrels (Model 5, Model 6, and Model 7), or 4 ½” round barrels (Model 5A, 6A and Model 7A). The octagonal barreled guns retained the “Cabin & Indian” scene introduced with the .28 Root revolvers, but the round barreled guns used the “Stagecoach Holdup” scene from the Model 1848 Baby Dragoon and the Model 1849 Pocket Model. All of the Sidehammer revolvers came standard with a blued finish, case hardened hammer and loading lever and varnished, one-piece, wrap around walnut grips. As with all Colt handguns, custom finishes, engraving, high grade grips and other extra cost embellishments were available and limited only by the buyer’s imagination and pocketbook!

Offered here is an attractive Colt Root Model 7 Revolver. The Model 7 was the last variant of the Root revolver produced and appears in the .31 caliber serial number range of 11,075 through 14,000. The Model 7 attempted to solve the problem with the rear-mounted cylinder arbor pin by securing the pin to the cylinder via a transverse screw in the cylinder, rather than by screwing the rear portion of the pin into the frame. The Model 7 was introduced circa 1867 and remained in production until the termination of the product line in 1870. During that time slightly less than 3,000 Model 7 Root revolvers were produced, representing less than 10% of all Root handgun production.

The Model 7 faced a tough market for handguns in the United States at that time. The Civil War was over, and thousands of surplus US military revolvers were for sale at bargain prices on the civilian market. Additionally, percussion handguns were becoming obsolete and cartridge handguns were becoming the new standard. As a result, it is not surprising that Root sales were lackluster. Due to poor sales, some Root revolvers remained in inventory for some years even after the guns were no longer in production.

The revolver is blued with the usual varnished walnut one-piece grip that was standard on most Root revolvers. The gun remains in about VERY GOOD condition. It retains a small amount of its blued finish, primarily in the protected area. Overall, the gun retains about 10%-15% of the blue with the largest area of finish remains on the right side of the frame, behind the recoil shield, as well as on the backstrap. The balance of the gun is mostly a dull pewter gray with scattered surface oxidation, oxidized age staining, and some lightly scattered pitting. As is so typical of these revolvers, the gun also shows some scattered small impact marks and dings, primarily around the rear of cylinder arbor pin. The gun retains most of the Stagecoach Hold Up scene, with at least 85% remaining visible. The barrel marking remains clear and legible. The butt of the gun has a slightly weak serial number, which is partially obscured by numerous small impact marks. The Root mechanism is rather complicated and fragile, and as a result most surviving Root revolvers have at least some minor mechanical issues. Amazingly, this revolver still functions very well and still times, indexes, and locks up as it should. The bore of the revolver is in VERY GOOD condition as well. The loading lever operates smoothly and correctly as well and locks securely into place when in the stored position. It retains strong rifling and is moderately oxidized, showing patches of pitting along its length. The varnished one-piece walnut grip is also in about VERY GOOD condition. The grip retains most of the original varnish with some moderate wear and loss, particularly along the sharp edges and points of contact. The wood shows some moderate wear along the lower edge, with a couple of nicks out of the right side and some rounding to the middle of the sharp lower edges on both sides which appear to be from carry wear. There are also some scattered minor bumps, dings, and mars, as well as some impact marks on the butt.

Overall, this is a solid and attractive example of a post-Civil War production Colt Root Model 7 Revolver. With the Model 7 representing only about 10% of all Root revolver production, it is a fairly scarce gun, particularly when compared to the production numbers of other contemporary Colt models. The gun retains clear markings and a nice cylinder scene, as well as some attractive blue on the right side of the frame and in protected areas. It would be a nice addition to any collection of Colt percussion revolvers or to a collection that concentrates on the many variations in the Root sidehammer product line.