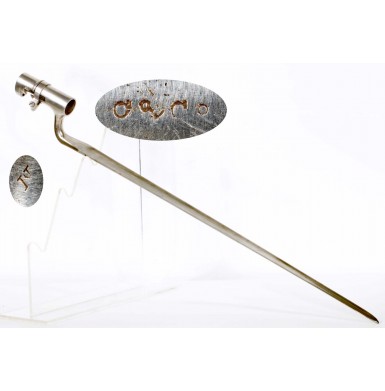 This is a VERY GOOD+ condition example of a scarce socket bayonet produced by the firm of Collins & Company for use on the US Models 1859 and 1863 Sharps Infantry Rifles (Reilly B-107). The blades of these socket bayonets were unmarked, but the socket was normally marked on the reverse with the C & Co maker’s mark of Collins & Company. The obverse side of the socket or shank is often marked with a single inspector’s initial. To the casual observer, the bayonet appears to be a standard US M1855/70 .58 caliber bayonet, but the lack of blade markings and the Collins & Company mark on the socket, in conjunction with the single sub-inspection mark, help to identify this as a Sharps rifle bayonet. The most important features that make this a Sharps bayonet are the taller bridge at the rear of the socket, which is necessary to clear the tall rifle front sight, and the socket diameter of .817” versus the standard M1855 socket diameter of .783”.

The bayonet offered here is in about VERY GOOD+ condition. The reverse of the socket is marked with the usual, sloppy C&Co mark, and the obverse side is marked with the inspector’s initial M at the socket/shank juncture. The Collins & Company mark on the left side of the socket remains crisp and clear, but the “M” inspection is a little weak. The bayonet is mostly smooth throughout and free of any significant pitting. The bayonet blade is mostly bright with some dulling and some lightly scattered areas of age discoloration and minor darkening. There is also some scattered pinpricking on the face of the blade, with slightly more pinpricking on the socket. The entire bayonet has been lightly cleaned to bright, but shows scattered flecks of dark age discoloration, much of which is in the pinpricks. There is also some scattered light surface oxidation present here and there, but most notably on the bottom of the socket and the shank. The socket has a slightly dulled pewter patina with similar areas of age discoloration and minor darkening. The blade is full-length, and the original locking ring and tension screw are present on the socket, with the ring functioning freely and smoothly. The socket shows scattered impact marks, as do the shank and lower rear of the blade. These marks are typically an indication that it was a tight fit on the rifle that it was issued with and required a little “motivation” to fix and un-fix it from the rifle.

Overall this is a very nice, solid example of the socket bayonet for US Civil War era Sharps infantry rifle. According to bayonet researcher and author Robert Reilly, only 10,600 of these bayonets were produced, which accounts for their scarcity today. These bayonets were issued to all infantry that were armed with the Sharps rifles that did not accept saber bayonets, including the famous Berdan Sharpshooters (the 1st& 2ndUS Sharpshooter Regiments). This would be a nice bayonet to complement your high-quality Sharps percussion military rifle and is in nice condition.