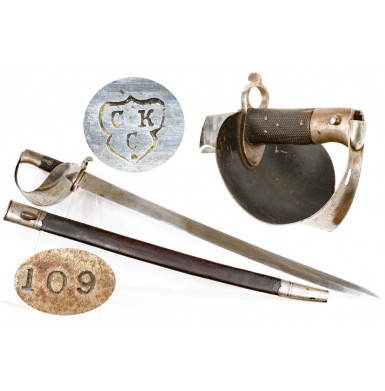 This is a VERY FINE example of the relatively scarce British Pattern 1859 Type II Naval Cutlass Bayonet & Scabbard for use on the Pattern 1858 “Enfield” Naval Rifle. These rifles had thicker barrels than the standard Pattern 1856 rifle and were rifled with 5 grooves instead of the normal 3 grooves. The British military wanted to create a dual-purpose bayonet for the rifle, much like Admiral Dahlgren did with his Bowie Knife/Bayonet for the US Model 1861 Naval Rifle and settled on a combination naval cutlass and bayonet as the most practical design. However, the length and weight of the bayonet must have made its use on the end of a rifle very awkward. The British military contracted for about 80,000 of these cutlass bayonets, and it is interesting to note that aside from a small contract of less than 800 delivered by Reeves of Birmingham, all of the other contractors involved used Solingen made blades in the fabrication of their bayonets. In fact, established Solingen sword maker and cutler Carl Reinhardt Kirschbaum of Solingen, working under the business name of C.R. Kirschbaum, established a new business venture for the specific purpose of producing Pattern 1859 Naval Cutlass Bayonet blades. Although the family tree is somewhat muddled, it appears that Carl Reinhardt, was the son of Rudolph Kirschbaum the Elder, and the grandson of Wilhelm B.S. Kirschbaum. Carl was born in 1814 and went into the family trade as a cutler and sword maker in 1834. In 1858 Kirschbaum established a second company concurrently with the first, by partnering with safe and lock maker Caspar Wilhelm Bremshey, in Ohligs, which was a Solingen suburb at the time. The firm of Kirschbaum & Bremshey was specifically established in 1858 to manufacture British Pattern 1859 Naval Cutlass bayonets for the British War Department. Students of Confederate imported arms will note that the Kirschbaum “Knight’s Head” logo is often encountered on the ricassos of Confederate purchased P1859 Naval Cutlass Bayonets that have engraved Confederate inventory numbers on the reverse of the pommel cap. Another interesting tidbit is that Kirschbaum & Bremshey purchased bayonet-making machinery from the English firm of Greenwood & Batley of Leeds, Yorkshire, England. Greenwood and Batley also provided the bayonet making machinery to the Bay State Tool Company of Massachusetts, who manufactured the first pattern US M1860 Spencer Rifle socket bayonet and the A.J. Drake Mississippi Rifle alteration socket bayonet. Another important Greenwood and Batley customer was the Confederate government who purchased bayonet-making machinery from them for the Confederate arsenal at Fayetteville, NC! It is interesting to see how interrelated the 19thcentury arms industry was around the world, suggesting that the “military industrial complex” existed at least a century before that term came into common use.

During the mid-19thcentury, the British arms trade used so many made Solingen blades that a British Ordnance Department viewing room was established there to inspect the blades prior to shipping them to England. The bayonets with these Solingen inspected blades are marked with a (CROWN) / S / # mark, with the number being the number of the inspector who approved the blade. Once the Solingen blades arrived in England, the makers who had the contracts to produce the bayonets would assemble, hilt and deliver them to the Ordnance Department. It is also interesting to note that the British Ordnance Department reported a significant number of problems with the bayonets, usually associated with the quality of the blade. Large numbers were returned to the Royal Small Arms Factory at Enfield Lock for repair and refurbishment during their service life. Even more were altered for use with the smaller bore Snider Naval Rifle from 1870-1871, making the unaltered, original bore bayonets fairly scarce.

The blade of this particular bayonet is marked with a maker’s mark of a CK / C in a shield-like cartouche. This appears to be an early mark of Carl Kaiser & Co of Solingen. However, the bayonet is devoid of any British military markings, meaning it was destined for commercial sale. As Naval Cutlass bayonets would have had little place in the hands of the British “Volunteer” militia, this bayonet was likely one that was imported for Civil War use.

The Pattern 1859 Type II Naval Cutlass Bayonet offered here is in FINE condition overall and is accompanied by a very hard to find original scabbard, that is in about VERY GOOD+ to NEAR FINE condition. The blade is full-length at 27” and is clearly marked with the Kaiser logo on the obverse ricasso. The muzzle ring measures .830”. As noted above, there are no British military acceptance or storekeepers’ marks on the bayonet anywhere. In fact, there are no other marks on the cutlass bayonet at all, other than a mating number on the reverse pommel cap. This mark is the number 109, struck upside down. The blade retains much of its original high polished steel appearance with only some very small areas of duller gray color and scattered flecks of oxidation and discoloration. The blade is almost entirely smooth, showing only some very minimal pinpricking, along its length, combined with the patches of age staining. The solid iron basket hilt has a bright appearance with some scattered surface oxidation and light surface rust, much of which could probably be cleaned off with a little effort. The interior of the guard retains about 90%+ of its original black jappaning with only some scattered scratching, light wear and surface scuffing. The original locking spring is present in the grip and functions exactly as it should. The two-piece pressed leather grip panels are in about FINE condition and show only minimal shrinkage and retain about 80%+ of their original finish. The grips retain the majority of their roll embossed knurling (while the pattern is “checkered” it is not actual checkering but embossing with a roll die) and show only some light wear, minor scuffmarks and some light rounding to the sharp checking tips. The grips are much nicer than they are normally encountered on a bayonet of this pattern and are really attractive. The balance of the iron hilt has thinly oxidized brown patina that is almost entirely smooth, over the duller gray base metal. The original scabbard accompanies the bayonet, which is an extremely difficult item to come by. The scabbard is in complete and solid condition with both original iron mounts in good condition and well secured to the leather scabbard body. The mounts have a medium dull gray, smoky coloration with some lightly scattered pinpricking present. The scabbard body is solid and complete with the original stitching securely in place along the seam in the rear. The only real condition issue for the scabbard is that the leather appears to have been over-dyed to black from dark brown, or possibly this is just added finish to make the black more even. Either way, it is relatively minor, as these scabbards are quite hard to come by and this is a solid, good looking example.

Overall this is a really attractive example of one of the scarcer British bayonets to be found on this side of the ocean. While there is no way to be sure, the lack of British acceptance marks raises the possibility that this cutlass bayonet may have been purchased by US or CS agents for use on one of the Enfield Pattern 1858 Naval rifles that were imported by both sides during the war. Of all the Enfield “short rifles”, the Naval Rifle was one that was imported in very small quantities, making the bayonets even more uncommon in America today. The bayonet is in really fine condition and is accompanied by a very scarce original scabbard. This is a great example of a rare bayonet, complete with scabbard, and would be a great addition to display with your Pattern 1858 Naval rifle or add to your collection of Civil War era bayonets.