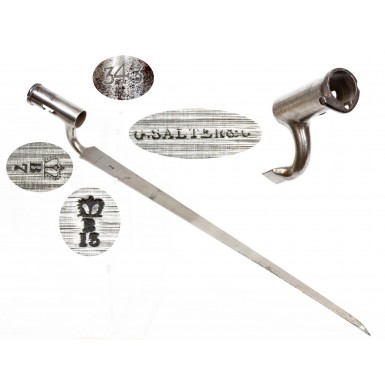 The only item related to the Pattern 1851 Minié Rifle that is scarcer on the market than the gun itself is its accompanying socket bayonet; the Pattern 1851 Socket Bayonet. The standard P1851 bayonet was an adaptation of the British Pattern 1842 Socket Bayonet that had been in use with the British military previously. Only two dimensional changes were made to the new P1851 bayonet when compared to the earlier P1842. First, the muzzle diameter of the new bayonet was reduced to .87” from .945”. This was a result of the reduced .708” caliber of the P1851 versus the earlier .75” caliber bore of the P1842. Secondly, the muzzle to stud distance was reduced on the new P1851 bayonet because the P1851’s front sight was placed closer to the muzzle than the bayonet stud was on the P1842. This new distance was only 1.2”, versus the earlier 1.6”. Otherwise the bayonets are visually nearly identical with an overall length of 21”, an 18” triangular blade and a 3” socket with a three step mortise and no locking ring. The bayonet was secured by an eccentric ridge on the rear edge of the socket that engaged the Lovell bayonet catch under the muzzle of the musket. Like most British socket bayonets of the period the construction was of a combination of iron and steel with the iron socket and neck blued and the steel blade left bright.

The first 18,000 P1851 bayonets were actually modified from existing stocks of P1842 bayonets by having their sockets shrunk by a process of heating and cooling and having the third step of the bayonet’s mortise cut an additional .4” to get the right muzzle to stud distance. Additional bayonets were supplied by the various British Ordnance Department contractors in Birmingham, as none of the bayonets were produced at Enfield. British military examples were inspected, typically with a {CROWN}/B/7. Those bayonets produced for commercial sale were not inspected. For whatever reason, the survival rate of these bayonets is extremely low. Over the last two decades while I have had the opportunity to own and sell several P1851s, but this is only the third P1851 bayonet I have ever had the opportunity to offer for sale, and the other two were actually the same bayonet that I sold twice, several years apart!

Offered here is a FINE condition example of a scarce Pattern 1851 Minié Rifle Socket Bayonet. The bayonet is a rare British military inspected example and is marked by the contractor who delivered the bayonet, G. SALTER & CO. The blade is War Department inspected on its face at the shank junction with the expected {CROWN}/B/7. An additional inspection mark {CROWN}/B/16 is present about 2” from the face of the shank. The rack or mating number 343 are stamped into the top of the socket. The Salter maker mark is located across the face of the blade, about 1.5” from the shank face.

George Salter & Company was a Birmingham manufacturer of spring steel and balances (scales) that was started in 1760 by Richard & William Salter. Upon their deaths John & George Salter took over the business and by the 1790s they had become one of the leading employers in West Bromwich (about 5 miles NW of Birmingham), continuing to manufacture springs and balances, and adding bayonets to their manufacturing capacity. For the next 200 years the company continued in business under the name of George Slater, and during the late 18th Century and 19th Century they were one of the premier bayonet makers to produce bayonets for the British Board of Ordnance (later War Department), as well as the commercial and export trade – especially to the North & South during the course of the American Civil War. During the latter part of the 19th Century, Salter returned to their original specialty and continued to expand their spring steel, spring and weighing and balance business. Salter actually continues to do business today as a subsidiary of Avery Weigh-Tronix, who acquired Salter in 2000.

Salter was one of the seven original contractors that were selected to produce the first Pattern 1851 socket bayonets. Initially Heighington & Co was contracted to deliver 10,000 bayonets at the contract price of £2.6, to be delivered at 1,000 per week. Apparently, they were unable to deliver as promised, so the contract was broken up among Heighington and six other contractors, including Salter. Salter’s initial contract was for 1,666 bayonets and was dated January 5, 1852. On May 28 they received a second contract for 2,609. On September 8 they received their third contract for 350 bayonets, delivering a total of 4,625 out of some 30,081 P1851 bayonets contracted for by the War Department between January 1852 and April 1855. As such, Salter bayonets represent only about 15% of the total P1851 bayonet production for the British military.

As noted, the bayonet is in FINE condition and remains quite crisp. The socket and shank retain about none of their original blue, but some hits are present on the reinforcing ring and eccentric Lovell catch, in the form of an oxidized plum brown patina. There is more scattered surface oxidation and discoloration scattered over the entire socket. The 3” socket remains in fine, crisp condition with no real pitting and both ends of the socket remaining perfectly round. The muzzle diameter measures .88” and the muzzle to stud distance measures 1.23”. The blade has a medium pewter gray patina and shows some very small scattered flecks of pinpricking on its face, as well as scattered freckles of darker oxidation, discoloration and age staining here and there. The bayonet blade is full-length with an 18” blade, measured from the face of the shank, and remains quite sharp at the tip. The markings on the blade remain very clear and legible and some original horizontal manufacturing tool and polishing marks are present along the first 4.5” of the blade, where the cross polish is evident on mint condition examples.