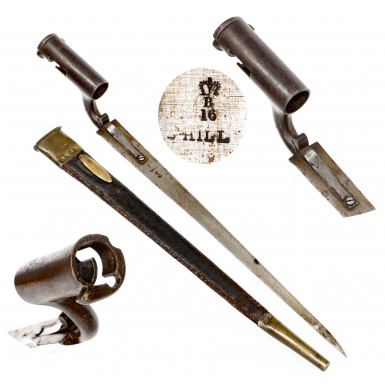 Introduced in 1840 for use with the carbine then being issued to the Irish Constabulary, later the Royal Irish Constabulary, these diminutive socket bayonets were somewhat unique in British service. The most interesting feature of the design was the spring catch mounted on the face of the blade to lock the bayonet into the scabbard, preventing its easy withdrawal from the scabbard. This feature was in effect a 19th century version of a Level II or Level III retention holster. The bayonets were initially produced with the Hanoverian catch rim (Type I), but after the adoption of the Lovell pattern catch circa 1844, all further production utilized Lovell’s large, eccentric ring catch (Type II). As the bayonet remained in use for some period both in Ireland and in some of the British colonies, the later production Lovell’s catch bayonet is more often encountered than the early production period Hanoverian catch examples which were not manufactured for as long a period of time.

This is a VERY GOOD+ to NEAR FINE condition example of the somewhat more common Type II Lovell’s Catch Pattern 1840 Constabulary Bayonet, although neither pattern can be called “common”. The use of the Lovell catch indicates production was post-1845, through the end of the general use of this pattern in the late 1850s. The bayonet is clearly marked on the face of the blade, near the ricasso S. HILL, the mark of the Birmingham contractor who manufactured it. Above the maker’s mark is {CROWN}/B/16 inspection mark of a Birmingham based Board of Ordnance inspector. The rear edge of the Lovell Catch is marked 7 and there is a file slash mating or assembly mark on the rear edge of the socket that is comprises of four angled slashes. The bayonet measures 16.875” in overall length with a 14” flat-faced blade (measured to the neck of the shank) without a fuller. The 3” socket has a .798” muzzle ring diameter and a 1.43” muzzle to stud distance. The bayonet’s blade is in about fine condition and is partly bright with a dulling pewter patina with some scattered and lightly oxidized age discoloration and flecks of discoloration on both the face and rear of the blade. The blade even retains some of the original cross polish that runs about 3.5” from the shank towards the blade. The blade remains very sharp at the tip as well. The socket retains some traces of thinning blue finish that has oxidized to a mostly rich plum patina. The socket shows some scattered pitting along with some surface roughness, with the top of the socket showing the most pitting. The spring catch on the face of the blade remains completely intact and is fully functional. The bayonet retains its original brass mounted triangular leather bayonet scabbard. The early pattern scabbard has a throat that is cut to accept the locking latch on the bayonet’s blade. Typical of most British socket bayonet scabbards of the period, it is seamed up front left side, while later in the 1850s the seam would be moved to the rear. The original throat and drag are still in place, secured through small, indented peen marks and the original frog hook is in place as well. The scabbard body is stamped with a weak {BROAD ARROW}/WD on its face, below the frog hook. The use of the “WD” War Department mark instead of the earlier “BO” Board of Ordnance mark indicates the bayonet would date to no earlier than about 1854-55 when the change in name for that department took place. The scabbard is in about VERY GOOD condition and retain much of the original finish on the leather with some scattered scuffing, loss and wear. The stitching remains almost entirely tightly intact, with only some minor areas of looseness and some scuffed wear.

Overall, this is a relatively crisp and attractive example of a scarce Type II Lovell’s Catch Pattern 1840 Constabulary Bayonet produced during the mid-1850s, complete with its original scabbard. These bayonets do not appear for sale on the market on a regular basis, particularly with the correct and original scabbard with the locking throat.