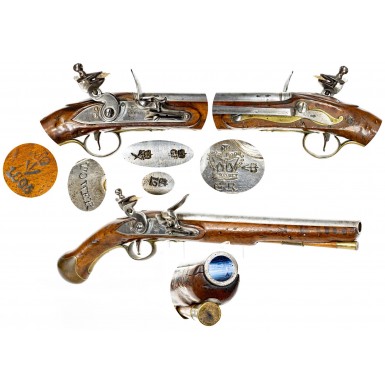 The British Royal Navy Sea Service Pistol has the unique distinction of being one of the very few military small arms to retain its basic form for a century of service. While most military arms have service lives of a few decades at most, the flintlock Sea Service Pistol of the British Royal Navy remained in general use from 1716 until 1816, exactly 100 years, with only some minor modifications. While these minor changes, primarily to the locks, have led modern collectors to label the variations as different pattern dates, the reality is that from its introduction circa 1716 through the end of the Napoleonic Wars in 1815, the basic form of the pistol remained unchanged.

The first pattern date applied to the Sea Service pistol in this form is 1716. The Pattern 1716 Sea Service Pistol was very similar to the Land Service Pistol of the same era, in overall appearance and design. The pistol was a single shot, flintlock ignition gun with a 12” long, round iron smoothbore barrel in “pistol bore”, approximately .56 caliber. The guns were of simple, but robust construction, and like their land service brethren were built with an eye towards the gun seeing equal service as a club, as it did as a firearm! In fact, US Naval manuals from the first decades of the 1800s included instruction on how to throw the pistol at an enemy, a tactic that no doubt originated in the Royal Navy. The 12” barrel of the Sea Service pistol was secured to the full-length stock by a pair of transverse wire pins, and a single screw through the breech tang. The forend tip was without cap or reinforcement. The furniture was of brass, with a simple cast brass lobed butt cap that doubled as the head of the pistol butt “club”, a brass triggerguard, a flat brass side plate and a single brass ramrod pipe. A steel belt hook was attached to the reverse of the pistol by the rear most lock mounting screw, and a stud at the inboard rear of the hook engaged a hole in the side plate to keep the belt hook from swiveling when in use. A recurved iron trigger was suspended from a single iron wire pin that passed through the stock and into the lock mortise. A simple, brass-tipped wooden rammer was secured under the stock by the ramrod pipe.

The lock was the one area that showed the largest amount of variation, and the pattern of lock is the principle reason for the various pattern date designations assigned to these pistols. The earliest Pattern 1716 pistols used the Pattern 1716 Sea Service Lock, which was flat with a semi-banana shaped profile with an integral, faceted, unbridled iron pan without a fence, and a flat reinforced cock (hammer). The plates were pointed to the rear and did not have the boarder-line enhancements of later pistol locks. All of the lock markings were engraved. These included the lock contractor’s name, as well as the lock’s date at the tail of the lock, and the royal crown over “GR” royal cypher forward of the hammer. The Pattern 1716/77 Sea Service Pistol was in in essence identical to the Pattern 1716, with the exception of the adoption of the new Pattern 1777 Sea Service pistol lock. The new lock featured a shorter sear spring, which meant that the ends of two internal screws are visible to the rear of the hammer, while the older 1716 lock had the end of the sear spring screw concealed behind the hammer. The Pattern 1777 lock also introduced a rounded pan with a bridle.

The final variation of the pistol was again for all reasonable purposes identical to the two previous variations, with the exception of the lock, which was the new India Service pistol lock. It was adopted for use with the Sea Service pistol in 1801 and that is the designation that this final variation carries, the Pattern 1801. The refinements of the new lock were primarily simplifications and production improvements. Visually the most identifiable features were the addition of a fence to the rear of the round iron pan and the change from engraving the markings on the lock to stamping them. With the simplification of the marking system, aesthetic enhancements like stamped boarder lines around the lock and body of the cock were added. The pistol remained unchanged in this variation until 1816, when it was determined that the barrels of the pistols should be shortened from 12” to 9”, and many Pattern 1801 pistols were subsequently shortened.

Other than some changes in the lock system, the long barreled Royal Navy Sea Service Pistol remained in the same basic form from and in constant service from 1716 to 1816, a claim that very few other military arms can make. These pistols saw service during the entire range of British Wars during that century of service, from The War of the Quadruple Alliance (1717-1720) to the War of the Austrian Succession (1740-1748), to the Seven Years’ War (or French & Indian War 1756-1763), through the American Revolution (1775-1783), and into the era of the Napoleonic Wars (on and off from 1793-1815, through 7 coalitions), and the War of 1812 (1812-1815), just to list the major wars that occurred during their service. It was the British Royal Navy that time controlled the seas during that time and extended British power around the globe. These pistols were a small part of the Royal Navy’s ability to project British influence beyond the horizon of the British Isles.

Overall this is really a FINE example of an original flintlock British Sea Service pistol from the middle of the Napoleonic War period. This pistol no doubt saw service during a very turbulent time within the British Empire, with the both the Napoleonic Wars and the War of 1812 all taking place during its service life. Whether the pistol ever saw service in American waters is hard to know, but it likely fired shots in anger from a ship such as the fictional HMS Surprise in the hands of a British sailor like Captain “Lucky” Jack Aubrey (the Russell Crowe character in Master & Commander). British Sea Service flintlock pistols like this are hard to find in such crisp and complete condition, especially when you realize that the pistol is 214 years old! This would be a wonderful addition to any early 19th century martial arms collection, especially one that concentrated on naval arms, British arms, the War of 1812 or the Napoleonic Wars.