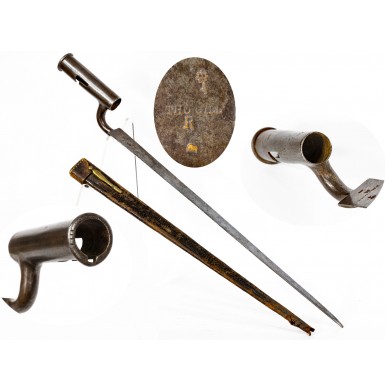 In 1756 the British began adopting a series of “carbines” for use by mounted troops and light infantry that were essentially scaled down versions of the standard infantry musket of the time. The term “carbine” in this sense did not refer so much to the reduced size and weight of the gun, which was more akin to a fusil than a musket, but rather to the caliber, a reference to the “carbine bore” that was nominally about .66 caliber plus or minus, versus the full-sized musket bore that was nominally about .78 caliber. These guns were slightly lighter, shorter and handier than their full-sized brethren and were easier to use in both a mounted capacity and in the dense brush of North America during the Seven Years War, better known as the French and Indian War. The Light Dragoon Carbine was intended for the use of mounted troops who relied upon their horses more for transportation than as fighting platforms. The dragoons would typically dismount and fight as light infantry on the battlefield. Because of this their “carbine” was designed to accept a socket bayonet, a feature not typically associated with a cavalry carbine. While the Pattern 1756 Light Dragoon Carbine was produced with a cavalry style sling bar for mounted carry, it was also produced with conventional sling swivels as well. However, in both cases, it still accepted a socket bayonet.

Offered here is a VERY GOOD condition example of a British Pattern 1756 Light Dragoon Carbine Bayonet with most of its original scabbard. The bayonet was made by the long-time Birmingham cutler Thomas Gill and is marked on the face of the blade THO.GILL along with a {CROWN/4} Board of Ordnance Inspection mark and a letter R under the Gill name and an additionally deeply stamped letter near the shank that is not fully legible. Thomas Gill Sr. began his operations in Prescott, Lancashire circa 1750 where he operated at a “Watch & Clock Maker, Saw, File & Tool Maker, Machine Maker and Steel Toy (Hardware) Maker”. He eventually would add “Bayonet Maker” and “Sword Blade Maker and Silversmith” to his business titles. On 17 February 1778 he approached the Board of Ordnance about becoming a contract maker of bayonets and was approved to work in this roll on 3 March of that year. The following year he delivered 8,500 Musket Bayonets to Ordnance and increased his output in 1779 by delivering 10,750 Musket Bayonets, 360 Artillery Carbine Bayonets, 110 Elliot’s Carbine Bayonets and an additional 600 “Carbine Bayonets” of various patterns. In 1780 he delivered 11,320 Musket Bayonets and an additional 180 “Carbine Bayonets” of various patterns. In 1781 he delivered 4,854 Musket Bayonets. In 1783 he was approved to work as a sword cutler for Ordnance and over the next two decades would produce a large number of swords and sword blades, develop a method of proving the blades and design machinery to perform the task. Gill’s success allowed him to open an additional shop at 11 Charing Cross in London in 1783 and by 1799 he had relocated the London premises to 22 Norfolk Street, Strand. Thomas Gill Sr. died in 1801 but the business continued under his son Thomas Gill Jr. and James Gill Jr. until Thomas Jr.’s death in 1826.

This British Pattern 1756 Light Dragoon Carbine Bayonet conforms to the standard dimensions for a bayonet of this pattern. According to the table in British & Commonwealth Bayonets by Skennerton & Richardson these bayonets had nominally 4” long sockets with a 20.5mm muzzle diameter and a 1.8” muzzle-to-stud distance. The blades 17” in length. Of the 20 various “carbine” bayonets listed in the table, only three have 4” sockets, the Pattern 1770 Light Infantry and Pattern 1770 Heavy Dragoon bayonets, both of which have a larger muzzle diameter. This bayonet also has the nominally 4” socket, 1.8” muzzle-to-stud distance and a .80” muzzle diameter which is nominally 20.5mm. The 17” triangular blade is flat without a face flute, although a pair of 15” flutes are ground into the two angled sides. The blade terminates in the typical ridge on the bottom and has a short, thick shank that attaches to the socket. The socket has a typical 3-step “Z” shaped mortise that is cut for a top stud and a rolled rim reinforcement at the rear. Four file slashes //// are cut into the rear of the rim and may be a mating mark. The bayonet has a mottled grayish brown patina with scattered surface oxidation on the blade and mostly legible markings. The socket has a darker plum brown patina. The diagonal hammer welded blend line between the iron socket and rear portion of the bayonet and the forward steel portion of the blade is clearly visible, starting about 3 ½” from the base of the blade and running diagonally across the blade face to about 5 ¼” from the base. The bayonet is free of any significant pitting but does show some scattered pinpricking and scattered oxidized surface roughness here and there. The only real condition issue of note with the bayonet is the very tip of the blade, representing at most about 1/16” to 1/8” is chipped. Otherwise the bayonet does show a few minor dings and impact marks around the face of the socket, at its rear and around the neck, all typical of a bayonet that saw service. There is one moderate ding on the face of the socket that is visible in the photos but it should not affect the ability of the bayonet to mount on the correct pattern carbine. The bayonet is contained in its mostly complete period scabbard that is in about GOOD condition overall. The scabbard measures 15 ½” in length and is missing the brass tip. The face of the scabbard body has two decorative incised lines running its length and the leather reinforcement collar at the throat is only partially present and is becoming detached. The stitching along the rear seam of the scabbard is starting to come apart and is missing from the last few inches of the scabbard. The original brass frog hook remains in place on the scabbard’s face. The scabbard shows moderate wear and finish loss with heavy crazing and scuffing present. The scabbard has shrunk slightly, so the bayonet will not seat fully, leaving about ½” of the blade out of the throat.

Overall, this is a very nice example of a British Pattern 1756 Light Dragoon Carbine Bayonet with much of its rare original scabbard remaining. The bayonet has no real condition issues other than the chipped tip and is nicely marked by a famous Board of Ordnance contractor. The bayonet would be equally appropriate in a display of Revolutionary War era arms or of later Napoleonic Period and War of 1812 edged weapons. The early style scabbard suggests this is more likely a circa 1780 era bayonet, but it is difficult to know for sure as the pattern did not change during the period of use. This is a nice bayonet you will be glad to add to your collection.