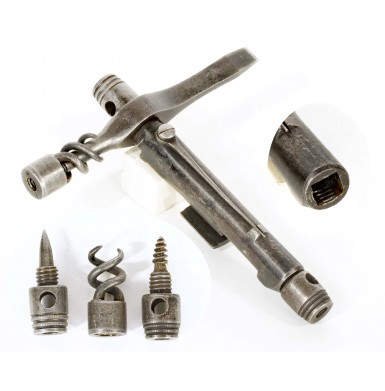 This is a FINE condition and complete example of the British Pattern #4 Sergeants' Wrench. This combination gun tool was introduced in 1859 and was superseded only two years later in 1861 by the Pattern #5 Sergeants’ tool. The #4 Pattern 1859 tool was slightly shorter than its direct predecessor the Pattern #3 1858 Sergeants tool. The Pattern 1858 tool was about 5 3/8” in overall length when assembled, while the Pattern 1859 tool was only about 4 ¾” in overall length. The #5 Pattern 1861 tool was improved by adding a tiny screwdriver blade to the end of the threaded arm that held the wiper. This tiny screwdriver blade was intended to engage the tiny tension screw in the newly adopted Baddeley Patent barrel bands that were added to the Enfields produced by the London Armoury Company and the Royal Small Arms Factory at Enfield Lock during 1861. Contractor produced arms from other London and Birmingham makers did not utilize the Baddeley bands during the Civil War era and continued to use the traditional Palmer patent clamping barrel bands with larger screwheads.

The sergeants’ tool was designed for use with the P-1853 family of “Enfield” long arms, including the Patten 1853 “Long” Enfield rifle musket, the Patterns 1856, 1858, 1860 and 1861 “Short” Enfield rifles, and likely saw use with the Pattern 1853 Artillery carbine and Pattern 1856 Cavalry carbine as well. This ingenious “T” shaped tool was truly a 19thcentury “Swiss Army Knife”, combining at least 8 tools into one compact package. The tools include the following:

The British infantry sergeant carried the tool inside the main flap of his cartridge box. The box was equipped with straps to retain it, and the screwdriver arm was dismounted in order make the tool even more compact when stored. It is not clear how the Confederate infantrymen who were issued the tool carried it. The tool will not fit in a normal US or CS cartridge box implement pouch, so the tool was likely carried in the pockets of the soldier’s coat or trousers, or possibly in his haversack. There is certainly no way that this would have been comfortable for the soldier who carried the tool! The Confederacy imported a large number of these tools during the course of the American Civil War, and they are dug fairly regularly in Confederate camps and trench lines, especially in the Eastern Theater. This not only shows use of these tools in the field, but also suggests that the less than easy to carry design may well have led to many being discarded by the soldiers who were issued the tools.

The tool is in about FINE condition and retains some strong traces of its original “blackened”, military finish, which was really a sort of matte bluing. The tool has a dusky blue-black over all the metal surfaces. There is some lightly scattered surface oxidation present on the surfaces of the tool. There are also some small minute areas of very light pinpricking and some very minor surface roughness present as well. The tool is not maker marked, which is not uncommon for these tools. Based upon a non-scientific survey of the “T-tools” encountered today, only about 25% or so appear to bear a maker’s mark. The tool is 100% complete and correct in every way. This tool has all of its original appendages present and the cone pick is present and full length. Typically, the bottom ¼” (or more) of the cone pick is broken off and at least one of the implements is missing. The tool even retains its original and correct British manufactured wiper. This piece is often missing or replaced on these tools, usually with the one of the more common US variant wipers. The metal of the tool is extremely crisp throughout with strong sharp edges, particularly on the screwdriver blade. The cone wrench recess shows only some light to moderate wear and no major damage. The original rough finishing and tool marks are still clearly visible on the tool from its original manufacture. This suggests the tool was never heavily cleaned, buffed or polished. All of the implements remain in crisp and very usable condition with fine, usable threads on all of the appendages. The tool is every bit as usable today as when it was originally manufactured. The tool measures 4.79” in overall length, with the top and bottom appendages attached, and the screwdriver arm, with the worm attached, measures 4.21” in overall length.

While there is no way to determine if this tool was imported for Civil War use, it is a very nice, all complete and all original example that is representative of the combinations tools that were imported for use with the Enfield rifles and muskets during the war. This is would be a great addition to your display of Civil War gun tools or to add to your Enfield display, and is very reasonably priced for such a nice, complete and original tool.