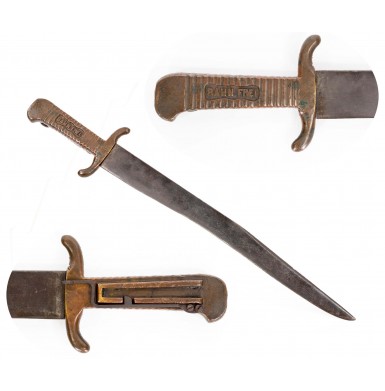 This is a unique and rare saber bayonet that is associated with the famous German immigrant Turner organizations that served with such honor during the course of the American Civil War. The Turnverein or simply “Turners” in America were nationalistic German-American gymnastics (athletic) clubs. Many were recent immigrants to the US, arriving in the late 1840s and early 1850s. When the Civil War broke out in their newly adopted land, many Turners rushed to enlist, and often sought out units comprised of their own members. The most famous Turner regiments were the 9th Ohio Volunteer Infantry, which was raised in the Cincinnati area, and the 17th Missouri Volunteer Infantry, known as the Western Turner Rifles, which was raised in the St. Louis area. Although both of these units were raised in specific areas, they drew Turners from all over the United States, including cities like Baltimore and Philadelphia, as well as those in the mid-west and west. Many of these men arrived in camp with their own personal weapons.

Usually they arrived with civilian style percussion target rifles, both half stock and full stock, in calibers that were typically between .42 and .45. While the styles and variations of the rifles were quite wide ranging, the two features that were typical of these guns were the addition of sling swivels, which were uncommon on civilian rifles, and a large lug to accept a saber bayonet; a feature almost never encountered on civilian guns of the period. The saber bayonets were typically very large, often featuring Yataghan or semi-Yataghan blades that usually measured between 18” and 24" in length and with large cast brass hilts. Often these hilts were cast with slogans in their brass grips, like BAHN FREI, a German idiomatic phrase that is roughly translated to mean: “look out” or “get out of the way”.  These bayonets were much less varied than the guns they went on, and while blade length and overall size and minor cosmetic features did vary somewhat, the basic form remained relatively constant. This is somewhat amazing as the bayonets were clearly manufactured by a wide variety of makers, ranging from well-established cutlers to local blacksmiths. The bayonets are rarely maker marked but are often numbered to match the assembly or mating numbers on the guns that they were fit to.

Through the extensive research of Turner historian Tom Rentschler, author of Rifles & Blades of German American Militias and the Civil War, some of these unmarked bayonets have been identified as to their makers. The bayonets were typically manufactured by local cutlers or makers of medical & dental instruments and were provided in their mostly finished form to the gun makers who then fit the bayonets to the lugs that had been added to the rifles. Maker marked Turner bayonets are quite rare and are very desirable for collectors. The bayonets that retain their original scabbards are even less often encountered, making them extremely desirable. For years many collectors and researchers felt that these huge bayonets were quickly discarded in the field, much as many of the large early-war Confederate bowie knives were. However, a Turner bayonet recovered at the Stones River Battlefield in Murfreesboro, TN many years ago, indicates that at least some of the 9th OH were still carrying their Turner bayonets,  and likely their rifles as well, as late as that battle in December 1862-January 1863.

Offered here is a classic example of a Turner Rifle Bayonet in about GOOD+  condition. The bayonet has been shortened long ago, making it into a very long fighting knife or short bladed sword, about the length of the classic Saxon Seax. Instead of the typical 18”-24” blade, the semi-Yataghan blade now measures 15 5/8” in length that is 1 ½” wide at the hilt and .324” thick at the rear of the spine. The blade has a semi-clipped point and is single edged with a 7 ½” false edge and no fullers. The overall length of the bayonet including the heavy 4 15/16” cast brass hilt is 20 5/8”. The brass hilt has strong copper content and has the rich dark reddish tone of what is often called in Confederate belt plates, “red brass”. The hilt has a 3 ¾” long S-shaped guard case integrally with the hilt as well as a large cast slot on the reverse, with an iron spring catch on the handle to engage the bayonet stud and guide on the Turner rifle. The brass grip is in FINE, untouched condition, with a rich, dark, un-cleaned ochre patina. The hilt even has patches of green verdigris present on some parts of the cross guard. The classic Turner slogan BAHN FREI cast into the hilt right side up, so that it reads from left to right when it is mounted on the rifle. The slogan is sometimes encountered “up-side down”, on the hilt as well. The raised block letters are cast into a depressed bow-tie shaped cartouche and eighteen grooves are additionally cast into the hilt to provide a more solid grip. There is no “=” (equal sign) between the words, something commonly encountered on some Turner Bayonets. Figure 41-a on page 122 of Mr. Rentschler’s book shows a Turner bayonet with the same hilt and a blade that is probably what this one looked like prior to being altered. The spring catch on the reverse of the grip is fully functional, but it is an excellent quality modern replacement that is so well made, aged and executed that if I did not mention it was modern, it would probably never be noticed. The catch was probably removed when the saber bayonet was cut down to a fighting knife length. This was almost certainly a period alteration, probably after the owner’s Turner Rifle was turned in for a new US Model 1861 Springfield Rifle Musket. I have seen many saber bayonets shortened and altered for use as farm implements over the years. This is a wicked fighting knife with little potential usefulness on the farm.

As noted, the blade has been altered from full-length and was probably about 18” long when it was originally produced. The blade has a thickly oxidized brown patina that is evenly distributed on the blade and is very attractive. The blade is mostly smooth with a few small, scattered areas of minor pinpricking and some very light pitting. The edge had been sharpened and honed many times over the year and still remains fairly sharp. The blade is secured to the hilt via a full length tang that is peened at the rear of the pommel. The peen shows wear and damage and the blade was probably removed from the hilt when it was shortened and then re-peened into place. As is typical of most Turner Bayonets, no scabbard survives with this one.

Many collectors consider the slogan marked hilts to be the most desirable form of the classic Turner Rifle Bayonet. This example has a wonderful rich and untouched patina throughout and is really attractive. These bayonets regularly sell in the $2,000 to $3,000 range and even higher with a scabbard. This example is altered by still displays wonderfully and has great look and a wickedly dangerous appearance. This would be a very attractive addition to any Civil War bayonet collection, as an addition to your Turner Rifle or simply to add color to any Civil War display. The bayonet is very fairly priced at about half the price these are normally found at. I think you will be very happy when you add this to your collection of Civil War period edged weapons.