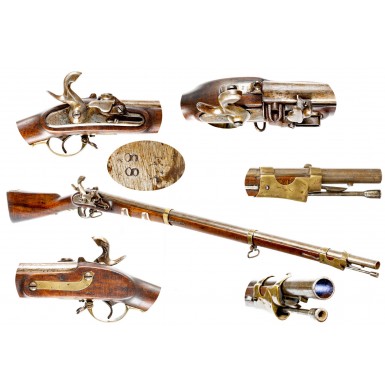 The Austrian Model 1842 Musket was the standard infantry long arm of the Austrian military prior to their adoption of the percussion ignition system in 1854, referred to as the System Lorenz in Austria. The Model 1842 musket was nominally 58” in overall length with a 42 ½” long round barrel that was smooth bore and was nominally .69 caliber. Current Austrian references specify the bore at 17.6mm, or about .69 caliber. Period US documents typically refer to the guns as .71 caliber, with bore sizes varying considerably. The musket was stocked in the traditional beech of Austrian arms and was mounted with either iron “Mit Eisenbeschlägen” or brass “Mit Messingbeschlägen” furniture. Three flat barrel bands secured the barrel to the stock along with a tang screw. The upper and lower barrel bands were spring retained, while the middle band was secured only by friction, with the sling that was would be attached to the swivel on that band playing a part in retention as well. The iron mounted variant weighed in at 9.59 pounds (4,350 grams) and the brass mounted version was slightly heavier (by 200 grams), weighing 10.03 pounds. It appears that most of the Austrian Model 1842 muskets imported for use in the United States were iron mounted. The muskets incorporated the Laukart system bayonet locking system to secure the quadrangle bladed socket bayonet. The sockets of the bayonets had a single straight mortise cut that engaged a locating stud located at roughly the 7 o’clock position when viewed from the muzzle and the long, Laukart spring catch would pass under the bayonet’s bridge, locking the bayonet securely in place.

As originally produced in Austrian, they incorporated the unique Augustin Consol lock ignition system. The system had originally been devised by Giuseppe Consol but was later improved upon by General Baron Vincent Augustin. Consol had patented the system in 1831 and by 1833 was applying it successfully to artillery pieces. This caught the attention of the Vienna Arsenal and by 1835 Consol was asked to help alter some existing Model 1807 flintlock Jägerstützen Rifles to the new system. The lock, known colloquially as either the “tube lock” or “pill lock” resembled the flintlock battery with a pan and cover. To operate, the pan was opened, and a detonator was inserted. This was essentially a percussion cap that was sealed with two hollow tubes extending from it in opposite directions. One of the tubes was inserted into the touchhole of the gun, with the other extending beyond the pan in the opposite direction, providing an easy way for the solider to handle the detonator. When the pan was closed, the extra tube was crimped down and sealed. The top of the pan contained a firing pin, which would detonate the primer when it was struck by the hammer. The spark from the primer would pass through the tube into the chamber of the gun and ignite the powder charge to fire the weapon. The modified guns had a steel striker inserted in the jaws of the flintlock hammer and a new “frizzen” which incorporated the striker that would ignite the primer tube replaced the original flint frizzen.

While the system would seem to be at best a lateral move from flintlock arms at a time when many countries were beginning to adopt the new percussion system, the Austrians felt it was an intelligent move forward. This was based upon two major factors. First, the experiments done with standard civilian percussion caps had not gone well as these caps were too small to handle easily in the field. Secondly, the training for the use of the Consol system for priming was considered quite similar to the training for the current flintlock system and would be easy for soldiers that had previously been trained to convert to.

The Consol system had some drawbacks. The modification of the non-interchangeable parts locks proved to be more difficult than anticipated, and the lack of universal fit between the pan and the touch hole made using the tube primers difficult. Additionally, the new pan cover included a firing pin that could potentially detonate the primer if it was closed roughly or too hard, resulting in an unintentional discharge. This was potentially deadly in the closed ranks of an infantry regiment.

As a result of the system’s shortcomings, General Baron Vincent Augustin and the Vienna Arsenal came up with some improvements related to the Consol system, resulting in the Augustin Consol lock. The new lock utilized a specially designed hammer, rather than a modified flint hammer, a newly made lock with interchangeable parts and a new firing pin system in the top of the pan that floated, making accidental discharges much less likely if the pan was closed roughly. Additionally, a “Kern” or flash communication tube was permanently inserted into the flash hole, giving a better place to insert the primer tube and making ignition more consistent. The new system made the alteration of older guns much more complicated, as it required replacement stocks to fit the new locks, but the original barrels and furniture could be reused.

With the adoption of the Augustin Consol ignition system a new series of Kadettengewehre (Cadet Guns) was adopted by the Austrian military. As with nearly every country in the world, military academies had been established within the Austrian Empire to groom future military leaders for their destiny. Just as the United States had adopted new series of cadet arms every time there was an improvement in firearms technology, the Augustin Consol ignition system resulted in the adoption of at least three different sized Cadet Muskets, scaled for use by the youngest of cadets through the teen years. In his definitive work on Austrian military arms, Die Hand-und Faustfeuerwaffen der habsburgishen Heere, Erich Gabriel shows a number of cadet muskets, including the Model 1800 Flintlock Kadettengewehre, the Models 1838/40  and 1838/42 Kadettengewehres with the Consol and Augustin Consol lock systems respectively and on pages 284-285 a series of even smaller Kadettengewehre that he simply refers to as Drei Kadettengewehre Mitte 19 JH (Three Cadet Guns of the mid-19th Century). All of these guns appear to Model 1842 type muskets and were finished in the bright with brass mountings, “Mit Messingbeschlägen”, with Augustin Consol locks. The guns were all rather diminutive, are 14mm smoothbores (nominally .55 caliber) and roughly half the weight of a standard Model 1842 Musket. The longest gun was nominally 45.25” in overall length with a nominally 32” long barrel and weighed in at about 4 pounds, 12 ounces. The medium length gun was 42.8” long with a 30.3” barrel and weighed slightly more at about 4 pounds, 14 ounces. This suggests the middle length gun might have had a more robust stock. The smallest of the cadet guns was 37.8” in length with a 26.5” barrel and weighed about 4 pounds, 5 ounces. All were of the standard M1842 three flat barrel band design with the upper band double strapped, the upper and lower bands spring retained and the middle band friction fit. The guns had a rudimentary fixed notch rear sight mounted on the breech plug tang and a simple blade front sight on the front strap of the upper band. A Laukart pattern bayonet catch was mounted under the barrel at the end of the stock and the ramrod was of the M1838 pattern with an inverted trumpet shape and a small round connector at the tip with female threads to accept cleaning implements. In the Prussian style, the rod is carried with the implement end protruding from the stock and the rammer end inside the channel. This eliminated the need to rotate the rod 180-degrees when it was withdrawn as was necessary with English, French and American ramrods. Sling swivels were mounted on the triggerguard bow with a screw and on the middle band with a rivet. The trigger plate extended to the rear of the triggerguard with two raised finger grooves. The Austrian beech stock was equipped with a raised cheek rest on the reverse, as was typical of all Austrian military arm of the period.

Offered here is a rare example of the largest version of the Drei Kadettengewehre Mitte 19 JH pictured and described on pages 284-285 of Erich Gabriel’s book. The gun is nominally 45” in overall length with a 32” barrel, is 14mm smoothbore and has a 5.125” Augustin Consol lock. The gun remains in its original Consol Lock configuration, making it a particularly rare and desirable gun. As the Austrian arms of the period were essentially handmade and were not made on the principle of interchangeable parts, with the exception of the theoretically interchangeable locks, the gun is assembly numbered 3 throughout. The gun retains the original sling swivels and correct pattern ramrod and is 100% complete and correct with the exception of the buttplate tang screw, which is missing and apparently broken off in the screw hole. Otherwise the gun is absolutely in the configuration that it saw service at an Austrian military school. Other than the assembly mark 3 the gun has no external markings other that the rack number 88 on the breech plug tang, behind the rear sight, and what appears to be the number 44 above that. The “44” may indicate the year of production of the musket.

The gun remains in about VERY GOOD+ to NEAR FINE condition. The gun is untouched with a slightly mottled, thinly oxidized brown patina over most of the iron barrel that had a dull, pewter gray patination. The metal is mostly smooth with some lightly scattered oxidized surface roughness here and there, as well as some very lightly scattered pinpricking. The brass furniture has a medium butterscotch patina with some underlying hints of greenish oxidation. The brass has a very attractive appearance. The original, unaltered Agustin Console lock remains in fine mechanical condition and is completely functional in all respects. The interior of the pan and the Kern show some moderate surface oxidation and some roughness from the erosive characteristics of the tube primers. The lock has a mottled gray and brown patina that is quite similar to that of the barrel. The bore of the musket is in VERY GOOD+  condition as well. The bore is partly bright with some scattered oxidation and discoloration and shows some scattered surface debris and minor dirt that would likely clean out easily. No significant pitting is noted, although some lightly scattered pinpricking is present here and there. A decent cleaning would likely upgrade the bore to “fine” or better. The stock is in about VERY GOOD+ to NEAR FINEcondition as well. It is solid and full-length with no breaks, cracks or repairs. The stock was probably lightly cleaned at some point in time but does not appear to have been sanded. The wood retains good lines and reasonably sharp edges, with the typical flat-bottomed Austrian forend of the 1838 and 1842 series of arms. The stock does show some lightly scattered bumps, dings and mars, as well as some minor surface chips; the most notable being at the upper rear of the rear lock mounting screw. Some minor chipping is also present around the lock mortise, primarily at the front edge.

Overall, this is a very nice example of a scarce Austrian Model 1842 Kadettengewehre that remains in its original Augustin Consol lock configuration. With the exception of the missing butt plate tang screw, the gun is 100% complete, correct and original and remains quite crisp. The gun would be a wonderful addition to any advanced collection of 19thcentury Austrian military arms, as well as an example of an Augustin Consol lock musket and would also fit in well with an advanced Cadet Musket collection. These guns very rarely appear for sale and as was typical throughout the world, it is uncommon to find a gun with its original and obsolete ignition system in place, having somehow escaped alteration to percussion. Don’t miss the change to obtain a very nice displaying and very scarce Austrian Kadettengewehre in its original configuration.