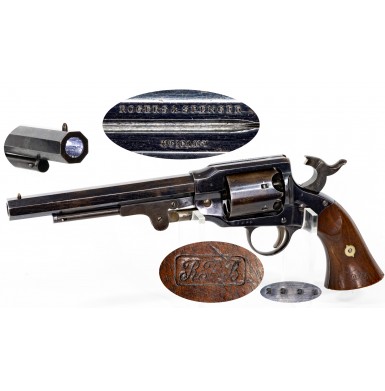 Rogers & Spencer delivered the first 500 revolvers from their new contract on January 30, 1865, and continued to deliver 500 pistols approximately every 30 days for the next nine months, with the final delivery made on September 26, 1865. As such, only 1,500 of the revolvers were delivered to the US government prior to the cessation of hostilities between the North and the South. Even those 1,500 guns failed to make it into the field before the end of the war, and all of the guns remained in storage at the New York Arsenal for the next 35 years. The revolvers were purchased at a US Government surplus auction on 19 June 1901 by the firm of Francis Bannerman. Bannerman purchased roughly 30,000 surplus military revolvers at that auction, including 4,982 Rogers & Spencer revolvers, at the rate of 25.27¢ each, a mere fraction of their original price of $12 each!

The Rogers & Spencer “Army” offered here is in very nice condition, and rates about FINE overall and retains about 50%+ of its original blue. The pistol only retains about 20%+ of its original thing blue on the 7.5” octagonal barrel, which has blended with a mostly smooth plum patina. Most of the blue is on the bottom of the barrel and in the protected areas. The gun retains about 80%+ original blue finish on the frame with the balance having a similar smooth plum patina as found on the barrel. The cylinder retains only some strong trace of its blue, and shows significant flaking, mixed with a smooth plum brown patina. The backstrap and gripstrap show only traces of blue, with the balance a smooth grayish brown patina. The metal is mostly smooth with some very minor, lightly scattered surface oxidation, as well as some scattered bumps, dings, and minor impact marks. The hammer and loading lever both retain faded traces of their original case coloring, which has faded to a smooth silvery gray, with hints of the mottled coloring here and there. The revolver is serial number 2993, and that number appears on the left side of the frame, on the side of the cylinder, on the loading lever, under the barrel (concealed by the loading lever) and on the bottom of the grip frame. That places the gun in about the middle of the deliveries to the Ordnance Department, probably in May or June of 1865. That means the revolver was probably delivered about two months after the cessation of hostilities. The revolver is crisply marked in two lines, on either side of the sighting groove on the topstrap:

The gun is profusely marked with US Ordnance sub-inspector initials, with the letter B being found throughout on most of the parts, small and large parts alike. The left grip panel is clearly marked with a very crisp script RPB cartouche, the mark of Springfield Armory sub-inspector Robert P Beals, who inspected arms from the decade before the Civil War through most of the 1870s. The action of the pistol is very good and remains quite tight. The pistol times, indexes and locks up as it should. The pistol retains extremely sharp edges throughout and even most of the screw heads remain fairly crisp. The bore remains mostly mirror bright with very sharp rifling. There is some scattered oxidation and a couple of spots of scattered very minor pitting, but otherwise the bore is quite fine and some of the apparent oxidation might clean out. The cylinder chambers remain crisp with some original blue as well as some oxidation from age. The original cones (nipples) are all in place and remain sharp as well. The cone recesses on the rear face of the cylinder show some surface oxidation, but probably not from use. The two-piece, flared, oil finished grips are in FINE condition as well. The shape of these grips results in easy chipping and damage to the thin lower edges, which are quite sharp. In the case of these grips, they are free of any breaks, cracks, or repairs. However, they do show a few minor dings and some very tiny chips along the sharp edges from handling and storage over the years, as well as one larger slivered chip from the lower rear edge of the right grip panel.