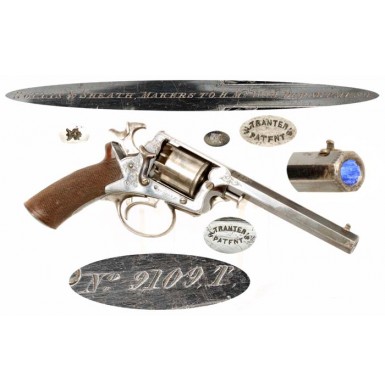 This is a VERY FINE condition example of a Tranter’s Patent 4th Model, single trigger percussion revolver. William Tranter was born in 1816 and died in 1890. He was one of the more prominent Gun, Rifle & Pistol Makers in the Birmingham trade, going into business in 1840 and continuing in the trade until 1885. He learned the trade working for Hollis Bros & Co (later Hollis & Sheath) and in 1840 bought the established gun making business of Robert Dugard at 29 “ Whitehall Street. Over the next decade he worked for himself and in joint ventures with his old employers John & Isaac Hollis as well as with Isaac Sheath. By 1850 he had located his primary business at 50 Loveday Street, where he was listed as having “shops, sheds, steam machinery, yard & premises”. Tranter secured his first British patent related to firearms in October of 1849 when he registered a “pepperbox mechanism and lever catch for pistol locks”. In January 1853 he registered British Patent Number 212 (1853) for a pair of “self cocking” pistol mechanisms and a safety mechanism. In December of the same year he registered designs for a double-action revolver mechanism, lubricated bullets and wadding, and a breech loading mechanism, all of which were covered by Patent Number 2921 (1853). In August of 1856 he registered the designs for a “double trigger revolver mechanism”, along with several other designs, all of which were covered by British Patent Number 1913 (1856). Tranter continued patenting firearm designs as late as 1887, after he had actually left the gun trade. Tranter’s most successful series of arms were his “self-cocking” revolvers, which were initially introduced in 1853. The revolvers utilized Robert Adams patent for a solid, one-piece frame and barrel that were machined from a single forging, and Tranter's own patented lock works. The original revolvers, known to collectors as 1st Model Tranter’s had no provision for a loading lever. The 2nd Model Tranter’s had a pin on the frame that allowed the attachment of a removable loading lever. The 3rd Model Tranter’s had a more permanently attached loading lever, secured by a screw. All of these models were based on his “double-trigger” system, which utilized a second “trigger” under the trigger guard to rotate the cylinder and cock the hammer. The trigger inside the triggerguard was used to trip the sear and release the hammer. The 4th Model Tranter revolvers (which were introduced in 1856) used a single trigger, and had what would today be called a conventional “double action” lock work. All of these revolver patterns were produced in a variety of calibers, with 54-Bore (.442) and 120-Bore (.338) being the most common calibers and the mid-sized 80-Bore (.387) being less often encountered. Barrel lengths varied as well, with the larger caliber arms typically having longer barrels. All of the guns were 5-shot percussion revolvers, and typically featured checkered one-piece walnut grips, although smooth wooden grips and other grip materials are known to have been used on a special order basis. The Tranter patent revolver was the primary competitor with the Adams and Adams-Beaumont patent revolvers in England, and was also exported widely. Pre-Civil War Tranter revolvers are known with US retailer marks, indicating that his designs were at least somewhat successful in the United States. The majority of the retailer marked guns are from the south, with the large majority of them being marked by New Orleans retailers. Based upon extant examples, the firm of Hyde & Goodrich (later Thomas, Griswold & Co) appears to have been the primary importer of Tranter Patent revolvers into the southern United States. Most of these retailer marked guns were sold cased with accessories, although some guns were certainly sold without the expensive casings and accouterments. During the course of the Civil War, it appears that the importation of Tranter revolvers was somewhat limited, at least in terms of Confederate central government purchases. However, period advertisements in the south and extant examples with southern provenance make it clear that the guns were imported by blockade-runners as speculative items for sale in the south. Such famous Confederates as General John Hunt Morgan (3rd Model #3758T), General J.E.B. Stuart (4th Model #8673T), General John Magruder (5th Model “ unknown number “ see Albaugh) and Colonel Dabney H. Maury (3rd Model #7993T), who served on the staff of General Earl Van Dorn, all owned documented Tranter revolvers. The famous “Pratt Roll”, which lists the revolvers in the possession of Lt. Julian Pratt’s squad of troopers in Company H of the 18th Virginia Cavalry, lists two Tranter revolvers, with the serial numbers 15,465 and 15,476. The squad roll is from July of 1864. This indicates that Tranter revolvers in the mid 15,XXX serial number range were in use, in the field by that time. Other Tranter revolvers with southern provenance include guns in the 12,360-12,375 range, which are retailer marked by T.W. Radcliff of Columbia, SC. Additionally, a March 10, 1863 advertisement in the Richmond Times Dispatch for H. E. Nichols of Columbia, SC read in part:

All of this evidence indicates that at least some of the Tranter revolvers produced during (as well as prior to) the Civil War, saw Confederate use. At least one Tranter that I previously owned was most likely imported by Schuyler, Hartley & Graham of New York. The gun was an engraved, nickel-plated 4th Model 54-Bore revolver with relief carved ivory grips. The gun was serial number 13619T. Dating Tranter revolvers based upon their serial numbers is somewhat problematic, as frames were sometime produced in advance and the guns completed at a later date. What we do know is that the “T” serial number suffix came into use around serial number 2200, sometime in 1854. From extant examples of Tranter’s with specific dates associated with them, it appears that those revolvers with serial numbers under 20,000 were produced prior to the end of 1865.

This particular 4th Model Tranter Revolver is in about VERY FINE condition. It is one of the very desirable 54-Bore revolvers, which is approximately .442 caliber; equivalent to the Colt “Army” revolver in caliber. The left side of the frame is crisply marked in a two line cartouche: W. TRANTER’s / PATENT, along the lower edge, between the front of the triggerguard and the loading lever mounting screw. The pistol is serial numbered No 9109TT on the right side of the frame, only about 500 numbers above the 4th Model Tranter owned by J.E.B. Stuart. Based upon a couple of known presentation Tranter revolvers in the 92XX and 93XX serial number range, this serial number suggests that the gun was a likely manufactured in late 1860 or early 1861, making it a prime candidate for an early war, speculative Confederate purchase. Interestingly, another 4th Model Tranter in the 91XX range is known in a private collection with a Hyde & Goodrich agent mark engraved on the top flat. This particular gun is retailer marked on the top strap: HOLLIS & SHEATH, MAKERS TO H.Ms WAR DEPARTMENT. As previously mentioned, the firm of Hollis & Sheath had strong ties to William Tranter. The firm of Hollis & Sheath was a partnership between Isaac Hollis and Isaac Sheath. They were listed as gun & pistol makers but also retailed arms produced by other makers, like this Tranter revolver. Isaac Hollis had learned the gun trade from his family as part of Hollis Bothers & Co, who operated on Weaman Row from 1840-1848. During the mid-1850s, no less than seven Hollis family gunmakers were active in the Birmingham trade. In 1849 Isaac Hollis & Isaac Sheath formed Hollis & Sheath, and the firm operated until 1861, when Sheath retired and Isaac Hollis formed Isaac Hollis & Sons at the same location. The new firm would remain in business until the turn of the century. During the period that this revolver was retailed by Hollis & Sheath they were located at numbers 5 through 11 Weaman Row. The successor, Isaac Hollis & Sons would do business with Confederate buyers, through S. Isaac Campbell & Company and based upon the markings on some extant examples through J.E. Barnett & Sons. A number of Confederate inspected or marked Isaac Hollis & Sons made Enfields are known, so the firm certainly offered its wares to southern buyers.

As noted above, the revolver is in about VERY FINE condition. The gun is in extremely crisp condition with sharp edges and lines throughout. The gun retains about 90%+ of its original blued finish, with some minor flaking and finish loss from wear along the sharp edges and around the muzzle. The 5 7/8” octagon barrel bears the expected Birmingham commercial proof marks of crowned crossed scepters the left angled flat, just in front of the frame juncture. The cylinder is well marked with the usual Birmingham commercial proofs between the chambers. The cylinder was case hardened, as were many Tranter and Adams cylinders, and retains about 90%+ coverage of the case coloring. The case coloring has dulled and faded slightly and is slowly starting to “silver out”, but the mottled shapes and coloration remain, and although the coloring is not as vivid as when new, the blues, browns and purples remain in muted tones. The cylinder appears to retain all of its original cones, and they are all in very crisp and find condition with sharp edges and no significant battering or damage. The bore of the revolver rates about VERY FINE as well, with sharp five-groove rifling. The bore is mostly bright and shows only some very lightly scattered pinpricking along its length. The metal of the pistol is smooth and is essentially free of any pitting, with only some very lightly scattered areas of minute pinpricking, mostly around the chamber mouths, the muzzle and the frame forward of the chamber mouths. The frame, rear of the barrel, triggerguard, loading lever and butt cap are engraved with loose foliate patterns, with about 10%-20% overall coverage. The engraving remains extremely crisp and well defined throughout the pistol and is well executed. Some of the screw heads are lightly embellished with engraving as well. The cylinder shows boarder line engraving at its front and rear, which is also crisp and sharp. The right side of the frame retains the original Tranter’s patent hook safety but is missing his patented spring catch, which retains the cylinder arbor pin. The safety is in fine condition and fully functional. The arbor catch has been replaced with a screw that is likely modern and was probably installed in the last 50 years. This is the only part of the gun that is not original or that has been replaced. The original Tranter “3rd-Model” loading lever is attached to the left hand side of the frame. The loading lever is marked in a two line cartouche: W. TRANTER’s / PATENT. The lever functions smoothly and locks securely into place. The original front sight is in dovetailed in place near the muzzle as well. The checkered walnut grip is in about VERY FINE condition as well, and matches the condition of the pistol perfectly. The grip is solid and free of any breaks, cracks or repairs. The checkering mostly sharp, but does show some light wear and a few small areas of minor flattening from carry and use. The action of the pistol works very well and the gun times, indexes and locks up, exactly as it should. Both the single action and double action mechanism of the pistol functions crisply with no noted issue, and the gun remains in EXCELLENT mechanical condition.

Overall this is a really attractive and untouched example of a large bore 4th Model Tranter percussion revolver. The gun is 100% complete, correct and original in every way with the exception of the missing arbor catch (which is often missing or broken) that has been replaced with a screw that does not affect the display of the revolver. The gun has a wonderful look to it and displays very well. Fine condition, large bore Tranter revolvers from the very beginning of the Civil War are difficult to find, and this one would certainly do a wonderful job of filling that hole in an advanced Civil War revolver collection.