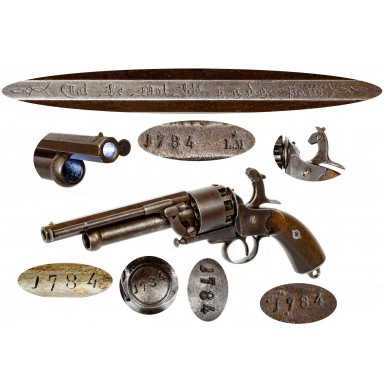 There is no revolver that is more instantly recognizable and synonymous with the Confederate military and the American Civil War than the LeMat “Grapeshot” Revolver. Even people with only a passing interest or knowledge of small arms used during the American Civil War will recognize the massive LeMat revolver that was about 14” in overall length and weighed in about 3 ½ pounds! For those who saw the movie or read the book Cold Mountain, the LeMat revolver carried by the protagonist through much of the story was practically a character in and of itself.

The LeMat was the invention of Louisiana Dr. Jean Alexander Francois LeMat who developed a uniquely powerful revolver that combined a 9-shot cylinder with a 6 ¾” .42 caliber octagonal barrel that revolved around a 5” long, .63 caliber (approximately 20 gauge) shotgun barrel that served as the cylinder arbor. By flipping a small lever on the end of the pivoting hammer nose, the shooter could determine whether the single action revolver was firing the standard pistol rounds from the cylinder or the shotgun barrel. While the shotgun barrel was short and held a relatively light load of shot, or a .63 caliber slug, it must have been a truly devastating weapon at close range. The total of ten shots without reloading made the LeMat an awesome amount of firepower in a period when the typical revolver held only five or six charges. With the LeMat all of this firepower, practically double a normal revolver’s round count, could be held in one hand. A Confederate cavalry trooper armed with a pair of LeMat revolvers could lay down more fire than two Yankee troopers each armed with a Colt pistol and a single shot carbine, and just one shot less than three troopers so armed! Approximately 2,900 full-sized LeMat percussion revolvers of all models, not counting the “Baby LeMat”, were produced between 1859 and 1865. Of those, at least 1,500 of them were directly contracted for by the Confederacy; 900 for the Confederate army and 600 for the Confederate the navy.

The LeMat revolver went through two distinct model variations, with a number of “transitional” guns produced in between. The First Model revolvers were produced in Belgium circa 1862 in the approximate serial number range of 1-450. These guns featured a loading lever on the right side of the barrel, a pronounced trigger guard spur and large rotating lanyard ring in the butt. The Second Model revolvers were produced in Paris circa 1864-65 and featured a loading lever on the left side of the barrel, a rounded trigger guard without the spur and a small, and a fixed lanyard ring in the butt of the pistol. These guns appear in approximate serial number range of 451-2500. Eventually the production of the LeMat revolver moved to England, where the balance of the pistols produced were manufactured in their own, somewhat eccentric, serial number ranges. This move was an attempt to improve the overall quality of the guns being produced, but it was done so close to the end of the war that most of the English produced guns almost certainly never got into Southern hands for use.  It is not uncommon to find mixture of 1st Model and 2nd Model features on many of the earlier, Paris made, 2nd Model production range pistols, which collectors refer to as “Transitional” LeMats.

The pistol offered here is an about VERY GOOD, untouched condition example of a Paris manufactured 2nd Model LeMat “Grapeshot” Revolver. As is often the case on examples of the LeMat revolver found today, the coveted combat handguns saw heavy use and tend to show significant wear when encountered today. It is not uncommon to encounter LeMat revolvers with a number of the small, and even larger parts replaced, as well as some restoration; sometimes significant. The guns were complex and were manufactured with many small parts that were prone to breakage. In fact, due to issues with production quality, LeMat was constantly having problems getting the revolvers that he delivered approved by the Confederate Ordnance department. This gun is almost an exception to that rule in that it is nearly 100% complete and correct, with essentially no restoration and with only a couple of tiny replacement parts. As is often the case, even on extremely high condition examples, the loading lever retaining catch spring appears to be an old replacement. This is part that is subject to breakage from normal use and in my mind is almost irrelevant in terms of a replacement part; almost every surviving LeMat has had this part replaced. The small spring that retains the frame index pin on the lower right side of the frame may be replaced as well; again, a fragile part that is often replaced. Amazingly the larger and more important parts that are normally repaired or replaced are original to the gun and remain in nice, untouched condition. The original loading lever is in place on the revolver, a part that is regularly replaced with a modern reproduction part. The lever even retains the original shotgun loading rod in its center and both the small shotgun rod and the main loading lever are numbered to the revolver. Additionally, the pivoting hammer nose that fires the shotgun barrel is original and undamaged, again a part that is regularly repaired or replaced. The pistol remains in relatively crisp, untouched condition with clear markings throughout. The barrel is engraved in Gothic block letters:

The marking is flanked by a pair of intertwined brackets that terminate in flourishes. As noted, the marking remains quite clear and fully legible. The left side of the barrel shows the expected * / LM proof mark as it should, which is proceeded by the serial number 1784. The matching serial number is found on the cylinder, frame, face of the take down pin, loading lever pivot, shotgun loading ramrod and trigger. The interior of the left side of the frame is assembly numbered 19, and the interior of both grips are numbered with the matching assembly number in ink in a period hand.

While it is somewhat typical for later production Paris LeMat revolvers to be marked with English, usually London, commercial proof marks this revolver was produced before that process started. In fact, the serial number places the gun in a rich range of Confederate purchased and used LeMat revolvers.

The metal of the revolver is essentially untouched and has a deeply oxidized, rich brown patina over most of the metal surfaces. While the gun is essentially devoid of finish, there are some flecks and flashes of original blue in protected areas around the rear edge of the recoil shield and here and there on the frame. Much of the metal remains relatively smooth, although the oxidation has left some areas of surface crust and minor roughness in places, and there is some scattered light pitting that is the result of actual use. The most obvious areas of light pitting are around the face of the cylinder, the frame in this area, the loading lever pivot hinge and of course in the chambers of the cylinder and the cone recesses of the cylinder at the rear. All of this is the result of the erosive characteristics of the caustic percussion caps of the period. This wear, light pitting and caustic erosion are typical of a percussion revolver that saw any significant use. There is also a thumb sized patch of light pitting on one quadrant of the cylinder, suggesting the revolver laid on that side, on fabric for a number of years, causing the minor roughness. The revolver also shows some scattered dings and surface mars, again not uncommon for any large revolver that saw military service 150 years ago.

The action of the pistol functions very well, and it times, indexes and locks up exactly as it should. The loading lever functions as it should, and the often replaced, friction fit rammer that pulls out of the loading lever to load the shotgun barrel is original, in place and as previously noted, is numbered to the gun. The original cones (nipples) remain in place at the rear of the cylinder and show moderate oxidation and some wear. The original front sight is dovetailed into the top of the barrel near the muzzle, but is missing the “Barley Corn” from the top of the sight base; a part that is often broken and missing from English and Continental revolvers of the period as it was a delicate part that was easily broken and lost.  The bores of the revolver remains in GOOD to NEAR VERY GOOD condition as well. The five-groove pistol bore shows some evenly distributed moderate surface oxidation with strong rifling and light to moderate pitting along its length. The shotgun bore is moderately oxidized as well with patches of surface crust and roughness here and there. The screws in the gun all show moderate use, with slot wear ranging from minimal to moderate. The grips are actually in about VERY GOOD condition as well. They have been lightly sanded, leaving the checkering somewhat light and smooth. As noted, the grips are assembly numbered 19 in period ink on their interiors, matching them to the assembly mark on the interior of the frame. The grips appear to be free of any breaks, structural cracks or repairs. There are a couple of marks on the left grip that almost look like grain or surface cracks, but appear to be scrapes and surface mars only, not actual cracks. Neither grip shows any cracks or repairs on their interiors. The grips show some scattered light to moderate dings, mars and handling marks indicative of service and use, which are somewhat less apparent due to the sanding.

While this is not a pristine or “minty” example of a 2nd Model LeMat Revolver, it is an essentially all original and complete example of a scarce and desirable gun with only a couple of inconsequential small parts replaced. It is very common to find these revolvers with major replacement parts, most often the loading lever. This gun clearly saw some real world use and shows that wear but does not appear to have been abused during its service. The gun is a nice, solid example of a well-marked, functional 2nd Model LeMat with a nice Paris address. The gun has escaped cleaning and has a wonderful, untouched look and remains fairly crisp with clear markings. The revolver would be fine addition to any collection of Civil War handguns or Confederate collection and is certainly priced very fairly for the quality, condition and eye appeal of the revolver.