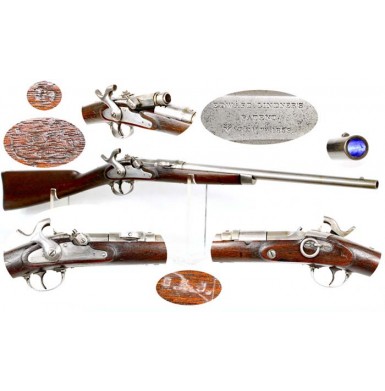 This is a VERY GOOD+ to NEAR FINE condition example of one of the rarer and less often encountered breechloading carbine from the American Civil War. The Lindner carbine was invented by Edward Lindner of New York, who received US Patent #23,378 on March 29, 1859 for his design. The patent covered his breech loading design, which used a rotating bolt to lock and unlock the breech, allowing the breech to tilt up for loading. The system was unique and somewhat cumbersome, but it did anticipate the concept of a rotating bolt with interrupted lugs, which would be the basis of design for almost every bolt-action rifle developed. Lindner apparently had no experience in the arms trade and as such relied upon Samuel B. Smith of New York to act as a sales agent on his behalf. Smith was an active promoter of Lindner’s design, and on November 6, 1861 he acquired his first U.S. Ordnance Department order for 400 of the carbines. The guns were specifically ordered for issue to the 1st Michigan Cavalry Regiment. Like so many American patent arms designers in the mid-19th century, Linder had no ability to actually produce the item that he had invented, so he turned to the Amoskeag Manufacturing Company of Manchester, NH to build his guns.

The carbine as produced by the Amoskeag Manufacturing Company was a .58 percussion ignition breechloader that was iron mounted, with a 20” round barrel and an overall length of slightly more than 38”. Like most cavalry carbines of the time, the guns had a sling bar and ring mounted opposite the lock to allow the attachment of a carbine sling. The breech was unlocked for opening by twisting a large thumbscrew on the breechblock. The breechblock was then rotated 90 degrees. This unlocked the lugs and allowed the breechblock to pivot upward at about a 45-degree angle, exposing the chamber for the insertion of the paper cartridge that contained the bullet and powder charge. As the Amoskeag Manufacturing Company already had a contract with the Ordnance Department to produce the US M1861 “Special Model” Rifle musket, an Ordnance Department inspector was already assigned to the factory. This meant that Armory sub-inspector G. K. Jacobs who was responsible for inspecting most of the Amoskeag produced arms inspected the Lindner patent carbines in addition to the Amoskeag produced muskets. The first delivery of the Lindner carbines took place on November 27, 1861, when 391 were accepted and subsequently issued to the 1st Michigan Cavalry, who used the guns from November 1861 through the fall of 1862, when they were replaced by Sharps carbines. From late February 1862 through early May, the regiment was based in Loudon County, VA and was heavily engaged against Stonewall Jackson’s “Foot Cavalry” during the 1862 Valley Campaign. While carrying the Linder carbines, the 1st Michigan was engaged in the Battles of 1st Winchester, Cedar Mountain, and 2nd Manassas, in addition to numerous smaller actions in the Shenandoah Valley. Apparently, the Lindner carbines performed well enough that a second order was placed on November 4, 1862, at the rate of $20.00 per carbine. This order was placed directly with the Amoskeag Manufacturing Company, bypassing Smith, and was at a reduced price from the first order. The original order only stipulated that the carbines were to be delivered at a price “not exceeding $25.00 each.” The new order was open ended in terms of the numbers to be manufactured, and read in part: “this department (Ordnance) will receive from Mr. E. Lindner all the carbines made after his plan which he can deliver up to the first of December next, which shall pass inspection” On January 9, 1863 the first carbines from the second Linder order were delivered, totaling 501. This brought the total number of Lindner carbines purchased by the US government to 892. The 501 delivered in 1863 were subsequently issued in the fall of that year to the 8th West Virginia Mounted Infantry. The 8th WV Mounted Infantry was re-designated as the 7th West Virginia Cavalry in January of 1864. While carrying their Linder carbines, the regiment served mostly along the Virginia “ West Virginia boarder, operated in the Shenandoah Valley and seemed to spend most of its time disrupting Confederate lines of communication and supply. The 1st Michigan and 8th West Virginia (later 7th WV) were the only regiments to use the Lindner carbine during the course of the American Civil War. Other than the 892 carbines delivered and issued to those regiments, no additional Lindner carbines were purchased by the US government. This is no doubt due to the fact that by the middle of 1863, Sharps carbines were becoming plentiful in the field, and by the end of the year Spencer rifles and carbines were becoming more readily available. By early 1864, the Sharps and Spencer would dominate the long arms issued to US cavalry regiments. The Ordnance Department managed to evade taking delivery of the additional Lindner carbines that Amoskeag produced, by refusing to inspect them. As the open-ended contract specified that the arms must pass inspection, and the government would not inspect the guns, Amoskeag was left with some 6,000 additional carbines and no market for them. Amoskeag proceeded to sue the US government for breach of contract but lost. The company finally managed to sell the unwanted arms in Europe during the Franco-Prussian War. These arms, known to collectors as “2nd Model Lindner Carbines”, are easily identifiable from the 892 guns that were delivered and issued during the Civil War; known as “1st Model Lindner Carbines”. The 1st model guns were made with blank lock plates, and with only the Linder patent information on the breech as markings. The subsequent, 2nd model deliveries, were manufactured with many of the parts from Amoskeag’s musket contract. These included Amoskeag marked musket locks, altered musket stocks, and Amoskeag style U * S marked musket buttplates. The sling bar and ring was also eliminated and replaced with a musket triggerguard with a rear-facing sling swivel. While Lindner’s system was only marginally successful in America, it was adopted by the Royal Bavarian Army in the 1860s. Additionally, some 103 Mississippi Rifles were altered to the Lindner system for the State of Massachusetts. Overall, even though the design was somewhat innovative, it was actually already obsolete in an era when self-contained metallic cartridges were becoming the obvious choice over percussion ignition ammunition for cavalry carbines.

The 1st Model Lindner Carbine offered here is in VERY GOOD+ to NEAR FINE condition. The gun is 100% complete, correct and original in every way. This is one the 892 carbines that was delivered and saw field service with either the 1st MI Cavalry or the 8th WV Mounted Infantry. The lock of the gun is unmarked, as it should be. The top of the breechblock is crisply and clearly marked in three lines, and reads

The gun is otherwise unmarked, with the exception of numerous small block letter J sub-inspection marks on many of the metal parts, a block G.K.J. on the stock flat opposite the lock, and a script cartouche on the top of the stock comb, in front of the buttplate tang, that reads AMC. A small 5 is also stamped in the stock comb, forward of the inspection cartouche. The “G.K.J.” stamp stands for Armory sub-inspector G.K. Jacobs who was stationed at the Amoskeag factory. To date the script “AMC” cartouche on these guns remains a mystery. The mark appears only on 1st Model Lindner carbines, and no current reference (including the new book on US military arms inspectors by Anthony C. Daum & Charles Pate) has been able to identify who this inspector is. Interestingly the other cartouche that appears in this location is a script “AMB”, the mark of former Harpers Ferry Master Armorer Armistead M. Ball, who defected to the southern cause after the capture of Harpers Ferry and died while working for the Confederacy at the Fayetteville Arsenal. As such either cartouche remains a mysterious conundrum.

The metal of the gun has been lightly cleaned and now has a medium pewter gray patina, with some scattered areas of darker age discoloration and some very light surface oxidation; primarily on the breech block. The metal is almost entirely smooth, with only some small, scattered areas of light pinpricking, and some more moderate pinpricking and light pitting around the breech area, mostly on the rotating block. The mechanism of the carbine functions correctly, both the breech system and the firing system. The action remains crisp on all positions and the breech opens and closes smoothly. The rotating thumbscrew has stripped threads at its end, as does the rotating breechblock where the large wing nut screws in. This means the piece is loose and easily removable and must be pressed into the block in order to allow the block to rotate. Over the years, almost every Lindner I have handled has had an issue with this design, as the thumb screw was a weak link in the action. Often the piece has been broken or stripped out and has then been welded into place. This could be fixed by inserting a Heli coil in the rotating breech block and by rethreading the thumb piece, or by simply securing it permanently. I will allow the new owner to decide who to handle this minor repair, should they choose to perform it. The carbine retains its original sling ring and L-shaped, two leaf rear sight. The original cone (nipple) remains crisp and retains some of its original blued finish. The bore of the carbine is in about VERY GOOD+ to NEAR FINE condition. It retains very good rifling and remains mostly bright. The bore shows evenly scattered lightly pitted along its entire length, with some patches of more moderate pitting nearer to the muzzle. A good scrubbing would probably improve the condition of the bore considerably. The stock of the carbine is in about FINE condition. The stock is full-length and solid, and free of any breaks or repairs. The stock may have been very lightly sanded at some point in time, but still retains very good, relatively sharp lines throughout. The stock does show a significant number of light to moderate bumps, dings, rubs and mars from issue, carry and use. As noted previously, a mostly legible G.K.J. mark is present on the stock flat, as is a partially legible AMC cartouche on the stock comb. There is also a small 5, a rack or issue number, stamped in the wood between the stock flat and the left side of the breech tang. This number is somewhat smeared and may actually be a “3”. The stock shows no abuse but does show the signs of carry and use by cavalry troopers during its service life.

Overall this is a FINE example of a scarce US military breech loading carbine. With the total production under 900 pieces, this is a difficult gun to find for sale, especially in crisp and complete condition. Most surviving 1st Model Lindner Carbines are found in relatively rough condition due to their field service. This is a gun that is missing from even many advanced Civil War carbine collections. This is a wonderful example that display well, is complete and correct and was issued to either the 1st Michigan Cavalry or the 8th West Virginia Mounted Infantry. You will be very proud to add this rare carbine to your collection, as this model is missing from many of the most advanced Civil War carbine collections.